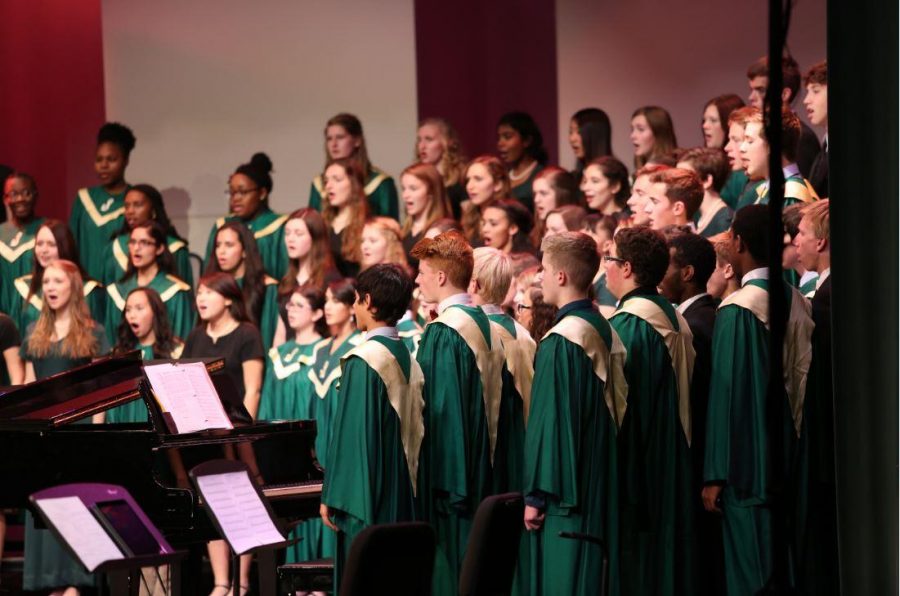 Combined choirs sing for the audience at the winter concert. Lots of hard work go into each concert. There are five performances each year.

The choral program is preparing for their final performance of the 2015-2016 school year.

Each year, choir holds five concerts where students prepare for weeks to perform in front of the crowd. The last one is the Spring Concert, typically held during the last month of school.

Choir students are just returning from state competition, where Aviator Chorale and Bella Voce received twos, and Select was given a one.

The concerts each have a theme- the Variety Show was Disney, the Fine Arts had more classical songs, and the Winter Concert contained holiday or winter songs.

Sophomore Morgan McAvoy said, “The Variety Show is my favorite concert. We work the hardest on it, and it always has a fun theme.”

The Spring Concert, however, does not have a set theme.

Bella Voce is actually singing “Niska Banja,” a song they prepared for competition, but they are also singing it for the audience.

Choral Director Ken Holdt tries to choose foreign language songs for each concert. “Niska Banja” is a Serbian song, which, according to phantomranch.net, “symbolizes the Dionysian joy of life, music, and dance.”

Besides the songs that each individual choir is singing, the choirs join together at the end of the concert to wish the seniors goodbye and good luck with the “Song of Farewell.”

After the concert, the students are awarded with various awards, like Outstanding First Year, Second Year, Third Year, and Fourth Year. Other awards are also presented, like the Choral Actor Award.

Also the Choral Boosters Scholarship is announced. The Boosters give money for two students a year who wish to continue involvement in music in college.

The end of the year brings happiness and sadness, especially the end of something you love. The last choir concert is always a bittersweet end.

McAvoy said, “I almost cried last year at the Spring Concert because I was really going to miss choir.”