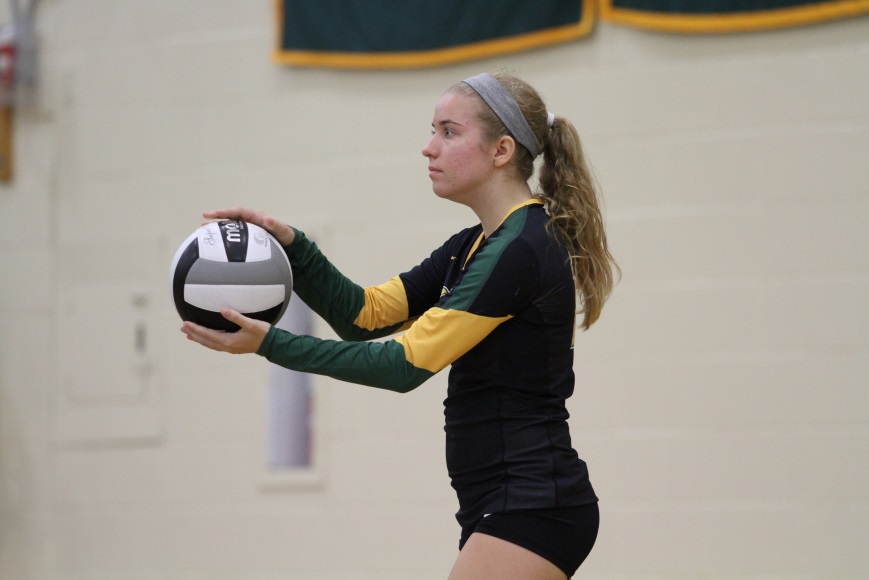 Gibson is the libero for the team. This means that she is the team’s best passer, and that she is in charge of running the defense. It is easy to tell which player she is because she wears a different colored jersey.

After a heartbreaking defeat by Ursuline, the Girls Varsity Volleyball Team came together and decided to look forward to a new season.  The team lost a total of four seniors, all starters.

“It’s always hard when you lose starters for a team and especially for us because along with losing seniors, we lost a lot of height,” senior Elizabeth Gibson said.

Last season, the team had a front row where the tallest player was close to six feet, as opposed to this year, where the team hardly has anyone over 5’7.’’

The volleyball team knew that the transition would be tough, but a different line up was not the only thing that would be new.  The team also got a new coach, Brittany Starkey, a teacher at the high school.

With all the new changes, the team headed into their season expecting things to be very different from last year.

“We have to work a lot harder, specifically on defense because we are on the shorter end of the spectrum.  Thankfully though, defense has always been one of our stronger assets,” Gibson said.

Currently, the volleyball team is 7-7 with an exciting win against Loveland and a disappointing loss against Mason.  Varsity has shown that it is able to compete with highly ranked teams in the state, but has shown little consistency in being able to finish games.

While this can be frustrating, the girls are determined to rally together and finish out the season stronger than how they started.

“We’ve always been a team that has had to face challenges, so this year will really be a test as to how well we can handle them under new pressures and new circumstances,” said Gibson.