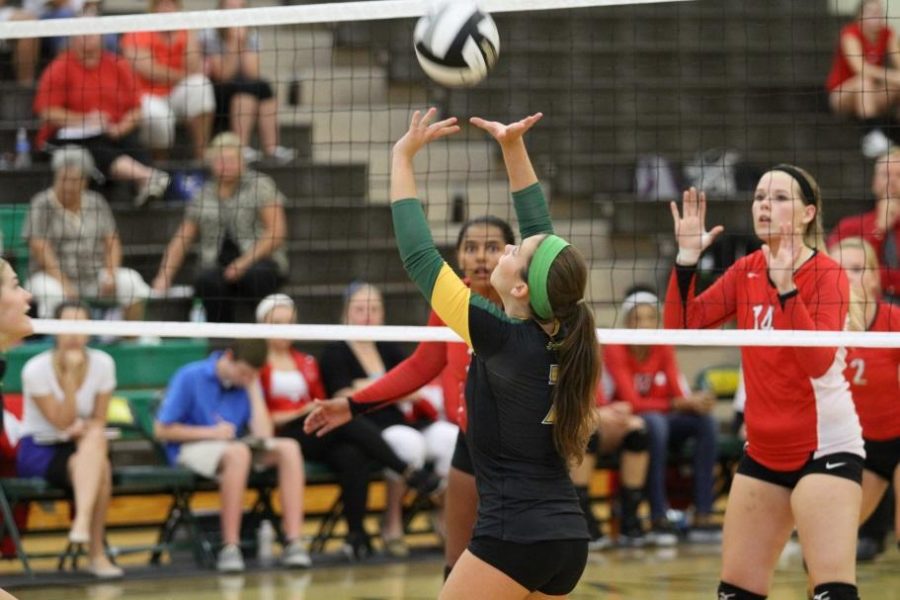 Senior Kristy Russell sets the ball to the outside hitter. Setters are responsible for running the offense and calling plays and routes for hitters to do. Currently, Russell, who has set for Varsity since her freshman year, is out for a few weeks with an injury.

Winning is a good feeling, and any athlete will tell you that. This is something the Girls Varsity Volleyball Team has not experienced in a couple of games. However, they worked hard to defeat both Turpin and Kings on Sept. 27 and Sept. 29.

“We had a really tough week last week, because we didn’t play too well, so we came into this week with the determination to play better as a team and come out with a better result,” senior Courtney Cron said.

The team endured a difficult loss to Lakota West last week.  After a two hour practice consisting of purely conditioning, the team resolved to beat Turpin that weekend.

The girls beat Turpin in three games, and moved onto Kings on Sept. 29. Last year, the girls lost in five to Kings.

“That was probably one of the worst losses we had as a team last year,” said Cron.

Keeping last year’s result in mind, the team was out for revenge. After three games, the girls pulled out a long sought after win.

“Beating Kings was such a great feeling because of how bad the game went last year. Accomplishing this goal that we set as a team is one of the reasons I love this sport, because we can all pull together toward a common thing,” said Cron.

The girls beat Colerain in three weeks on Sept. 30 and will play Lakota East on Oct. 2.