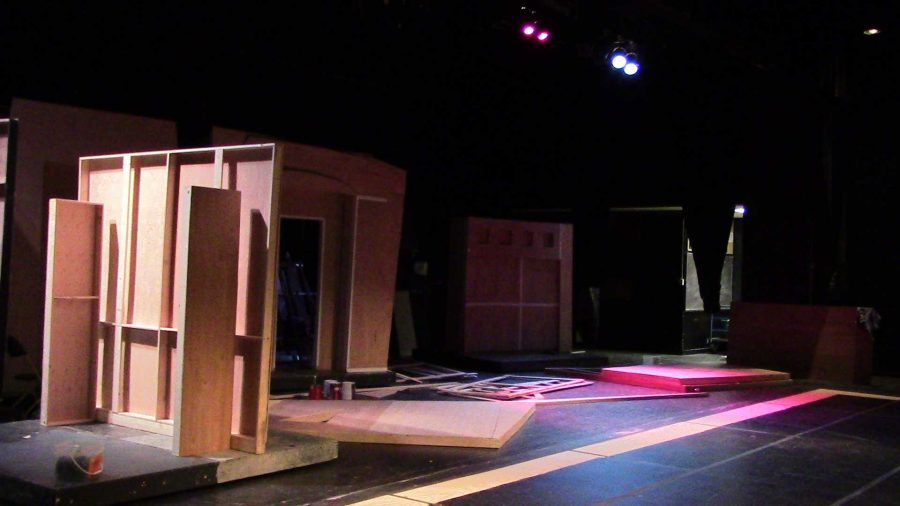 The set of the upcoming performance of Shakespeare’s Twelfth Night stands ready to be finalized. The class had to prepare half of their production for the One Act Play Festival, which took place on Oct. 19 at Anderson High School. “A lot of great, professional effort was put into it. The other acts were also really fun to watch. In the future, I hope more people will come to the event because the performances all made for a fantastic night,” said Emily Winchell, 12. Photo courtesy of Tori Swart

As a promotion of young actors as well as the Greater Cincinnati Theatre League (the League), four high schools- Anderson, St. Xavier, Indian Hill, and SHS- performed in the One Act Play Festival on Oct. 19.

Not only was it the fourth anniversary of the festival itself, but also the first time the League was being integrated with the performances.

Members were offered reduced prices for tickets, while the four 30-minute shows were separated by ten-minute intermissions and adjudications that were presented at the end.

The event was a realistic way to complete a quarter assignment for the Aves Theatre students, giving them the opportunity to critique and enjoy four different shows in one night.

“The lead in Anderson’s show (The Firecracker Incident) did the geeky voice of his character very well. His voice had the right resonance and a good pitch that embellished his character, but did not overwhelm it,” said Elizabeth Rosenberg, 12.

St. Xavier performed All I Really Need to Know, I Learned from Being a Zombie by Jason Pizzarello.

“I thought their acting was well done and realistic, even though the script itself was lacking in some areas,” said Kayla Kramer, 10.

Indian Hill also put on a comedy, The Importance of Being Earnest, by Oscar Wilde. According to Ms. Sarah Garvey, co-director of Aves Theatre, the show also poses quite a challenge in regard to choosing a setting.

In regard to the Aves Theatre production, most theater students found it thoroughly enjoyable.

“When listening to Shakespeare dialogue, it’s hard to really laugh at the situations because it is so confusing. This is why our physical comedy was so good, because it made the play so much more funny,” said Emma Steward, 10.

Ultimately, the students discovered that theater is not only the bright lights or elaborate sets, but the people that develop the characters.

“We always say that a good ensemble or bad ensemble makes all the difference in a production. We definitely saw evidence of that at the One Acts,” said Garvey.