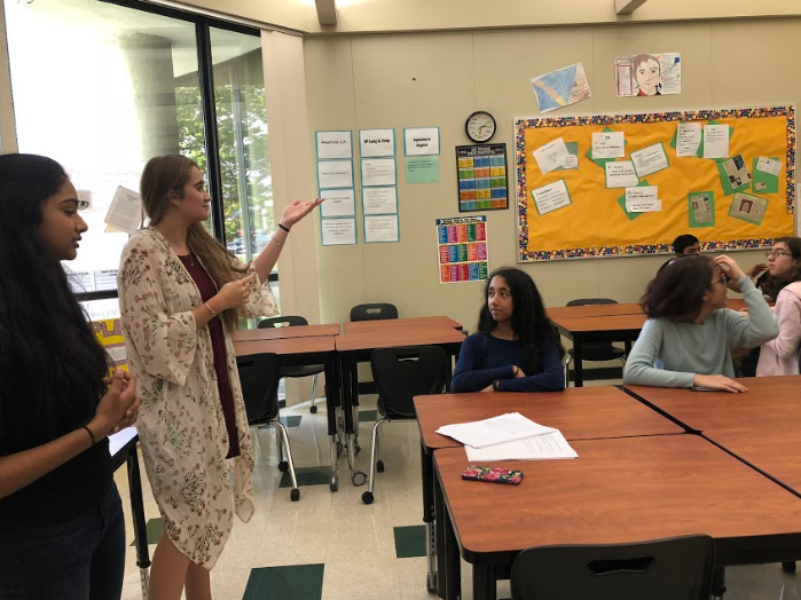 SPEAKING OF SPEECHES. Juniors Akhila Durisala and Abigail Zolla introduce details of public forum debating to the underclassmen members. During this meeting, the club practiced with a mock debate of whether SHS should have an open campus for lunch. “I’m excited to see what [the team members] will bring to the table,” Durisala said.

If you love researching, speaking, debating, and competing, then the newly formed SHS Speech and Debate club is definitely for you.

Juniors Abigail Zolla, Akhila Durisala, and Shaan Hershey formed this club at the beginning of the school year. Although there used to be a former Speech and Debate club in SHS, these three claim of an improved makeover.

“In the years past, the Speech and Debate club hasn’t really been about competing…but [Akhila, Shaan, and I] are trying to rebrand it into a competitive team such as Mock Trial,” Zolla said.

The club plans on attending two competitions at Moeller High School and Princeton High School this year, sticking to more local ones for this first season. At the end of October, the team will travel to Dublin Jerome High School to observe a speech and debate competition and to establish a footing on the structure of a debate.

When talking about preparation for competitions, Zolla stresses the significant amount of time needed to perfect the debating performance.

“[There are] meetings, but thing is, a lot of it has to be done [out of school], you’re not going to be able to do stuff just after school on Wednesdays,” Zolla said.

The leaders of this club decided to set their focus for this season to be helping the underclassmen gain experience and knowledge on how to debate.

“[Mrs. Johanna Gordon] and we are trying to teach the underclassman [about debating] because there are only a handful of us who know how to debate; a big process [for preparing for debates] is trying to teach them what affirmative, negative, [and so on] is,” Zolla said.

“My goal this year is to prepare the underclassmen, especially enhancing their public speaking skills, and their ability to strategically and logically argue any point at any given time,” Durisala said.

The meetings will be held every Wednesday after school at 2:30 p.m.