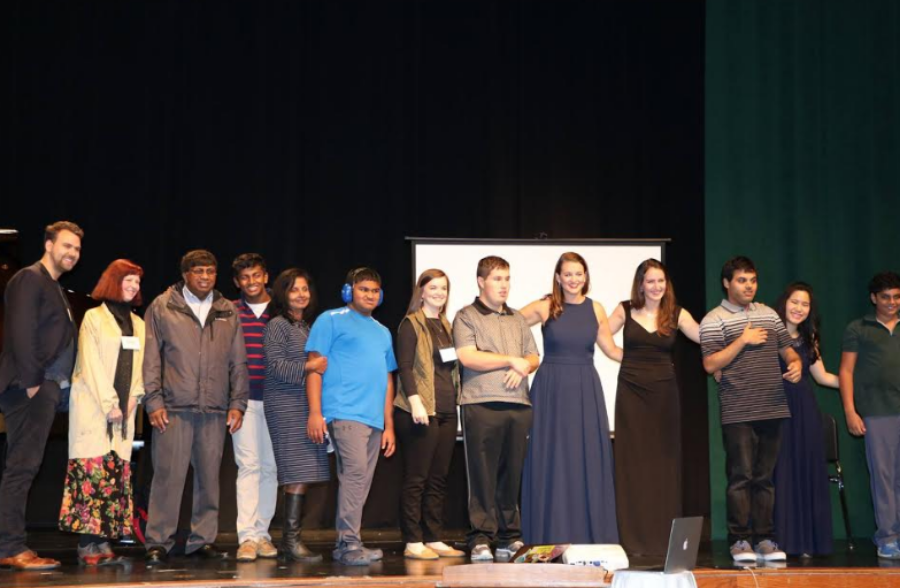 PERFORM. Last year's participants took a group photo during the event. The lyrics for each song are the poems that the students create. The songs are composed and then performed at the concert.

The Lynx Project will be putting on a performance at SHS on Saturday, March 2 at 6 p.m. in the theatre.

According to their website, the Lynx Project is “…a non profit art song initiative whose mission is to build community through innovative song programming and educational initiatives and to provide a platform for every voice to be heard.”

The performance taking place at SHS is apart of the Lynx project’s Autism Advocacy Project. According to the Lynx Project’s website, five composers have been working for many months to create songs out of the writings of three local youth who are non-verbal and have autism—Luke Burke, Michael Zepf, and Kenta Mignot.

“As musicians, and particularly as [vocalists], it can be easy for us to take for granted how easy it is for us to share our voice. We recognize that all human beings want to be heard, recognized, and appreciated.

“As performers who almost always sing other people’s words, we found that we had an opportunity to use that platform to shed light on those whose voices need a little amplification,” Moore said.

For some, the mission of The Lynx Project may seem impossible- how do they share the voices of individuals who are non-verbal?

Something being used by families is the Rapid Prompting Method.

“Helping Autism Through Learning and Outreach is a non-profit organization supported by parents and professionals nationwide who are dedicated to the use of Soma Mukhopadhyay’s Rapid Prompting Method for improving academic success and communication for persons with autism and similar disorders” is their mission according to their website.

Moore notes that “before discovering the Rapid Prompting Method I think many families might have felt it was impossible to ever communicate with their child.

“I am qualified to speak on the specifics of the method, but through an understanding of the individual sensory needs of each individual with autism, an individual is able to develop the motor planning to communicate their thoughts by pointing to letters on a board.”

This use of a letter board allows individuals to point to letters on a board, which allows them to spell out words and create sentences.

The Lynx Project, specifically the Autism Advocacy Project is making impacts on the community, and the impact is only growing from the last performance.

“[The Lynx Project] has been profoundly impactful on all those involved in producing and performing the Autism Advocacy Project to see the direct impact made on the community.

“Though we have so far only been able to share the voices of seven specific people, we believe that ripple effect is felt beyond those communities, and those with similar struggles feel they are in a sense heard as well.

“We are very grateful and moved by the response our audience has shown to the music- we have seen hearts and minds changed about perceptions of autism and other disabilities,” Moore said.

To learn more about The Lynx Project, click here.