Whales out of water

Why they belong in the wild 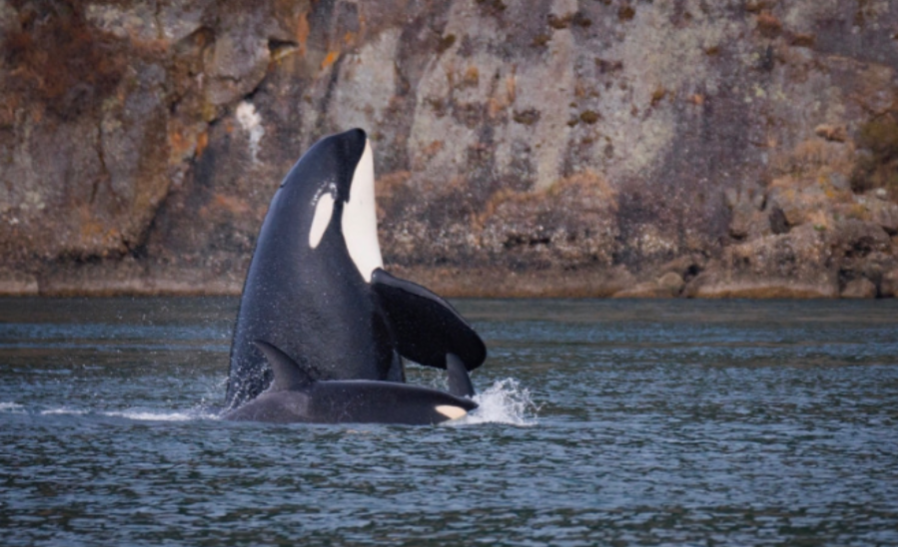 CAPTIVITY. Though Orca whales are the main attraction of parks like Sea World, bringing awestruck children and families from all across the country, these animals should not be kept in captivity. The physical and mental affects of confinement are extremely harmful to the orcas, and are causing many to die out fast. “I think that unless the aquarium or park is purely based on rehabilitation, it should not have any captive animals,” said Kasey Lowe, 10.

The spectators teeter on the edge of their seats as the water ripples in silence. The excitement is palpable, and a small girl sits with her thumb in her mouth, her eyes wide. All of a sudden, a massive orca whale emerges from underneath, performing two flips in the air while showering the crowd with a light mist. It plunges back into the water as the toddler shrieks with joy and claps her sticky hands together. Most people have a similar experience while witnessing the beauty of these creatures.

But do these people know that the orca is miserable? That his whole life has been drastically altered, just to entertain people like them? That the greed of organizations such as Seaworld have taken priority over the well-being of these gentle giants?

For over a century, killer whales have been captured from their haven in the wild to serve as our entertainers in captivity. They flip, twirl, splash, and dance for millions of people every year, as a chorus of ‘oohs’ and ‘aahs’ pour out over every little trick. But the peaceful appearance of the animal is merely an illusion; these whales are put through tremendous hardships and terrible situations causing a wide variety of complications.

There are many adverse physical effects of captivity. As one of the fastest, largest, and smartest predators on the planet, these sea creatures need plenty of exercise to stay physically healthy. “Many orcas travel over 100km (62 miles) every day,” said scientist Melissa Hogenboom as per BBC America.

With a tank the size of a basketball court, they cannot even come close to this number. Research shows that an orca would have to circle their tank about 1,400 times to get the equivalent amount of exercise. Without this exercise, killer whales become lethargic and can sometimes fall into unusual torpors. In addition to this, countless captives have been seen with their dorsal fins flopped over after a period of time spent in parks.
According to Swimmingfree, 30-100% captive orcas have dorsal fin collapse due to the fact that the small tanks that they inhabit cannot fit their basic needs.
Instead of swimming about, the animals spend a majority of their time resting on the surface in their tanks; they only have a choice of swimming in circles the entire day. These movements cause fin atrophy, and eventual collapse. In contrast, less than 1% of wild orcas exhibit fin collapse, showing these harmful effects are ones of captivity and are not common at all in their natural habitat.

Fights also break out, which leaves many of the creatures injured, and some even try to escape their enclosures. They have scars, worn down teeth, and rake marks across their bodies from being mistreated by other whales, and this can contribute to the heightened mortality rate.

“Wild males typically live for about 30 years but can live up to 50 or 60… females usually live up to 50 but can live up to 100,” said the National Oceanic and Atmospheric Administration. In Seaworld however, this is not the case. Statistics show that males often live to be 17 while females have a span of 29. This dramatic difference is solely because of one pure fact; these animals are far too large to be cooped up in an aquarium.

Staying in captivity affects the creatures mentally as well. Orca whales live in large families in the wild, known as pods, which can consist of up to 50-100 whales. This populated community creates a diverse way of communication and interactions. In fact, the whale brains are four times larger than human brains, and even have an extra part in their mind.

Not only do they have similar brain structures to humans, but they also have an extra part of the brain that we do not even possess. Because their connection with their pod is shattered upon capture, the animals tend to shut down this part of their brain, which in turn leads to terrible consequences, like boredom, psychosis, compulsive behavior, compromised health, obsessive-compulsive disorder, and even death.

If all of these conditions are the results of human greed, then you would think that parks would try to soothe this pain, right? This, in fact, is far from the case.

Many parks admit to permitting the use of psychoactive drugs to stimulate the whales instead of providing them with family members to soothe the pain of captivity. Though these side effects of confinement are extremely harmful to orcas, there have also been instances of human harm as well.

According to the Whale and Dolphin Conservation, there have been over 100 aggressive acts made towards trainers as well as spectators during the long course of confinement, in addition to 4 deaths.

So have I convinced you?

When will the lives of majestic, innocent, beautiful creatures, ever take priority over man’s need for money and entertainment?

Until these majestic mammals are free from captivity, we will never be at peace with ourselves. Is that a burden you are ready to bear?