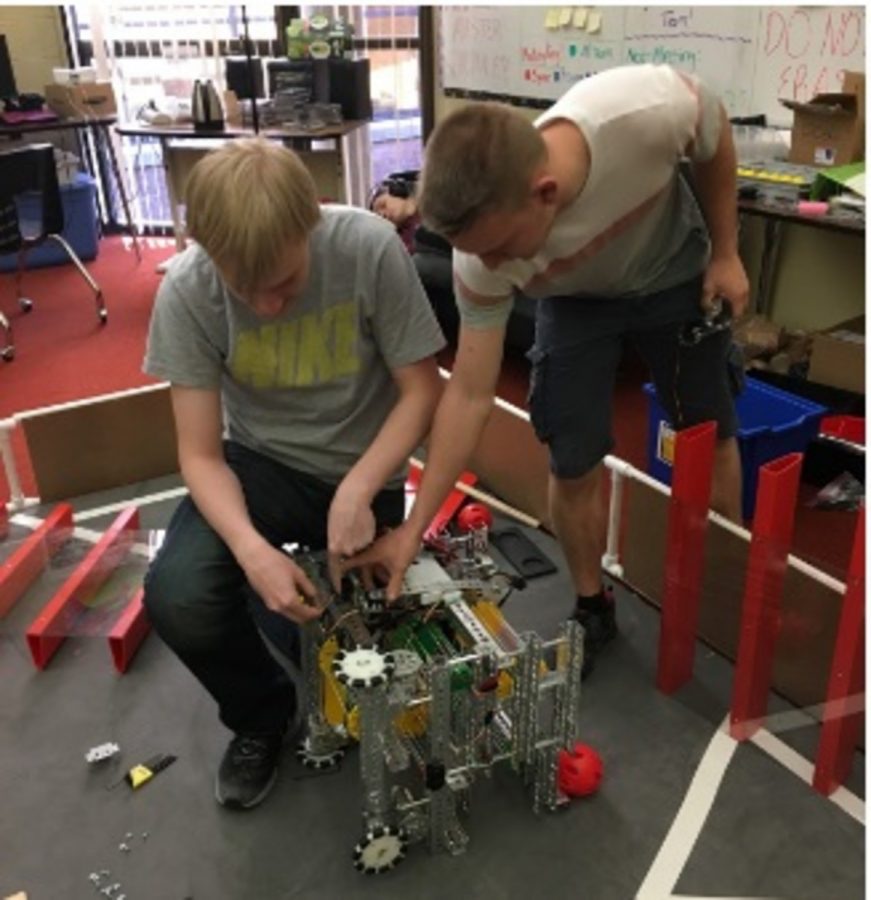 PROGRAM. Juniors Nick McDonough and Phil Bryant work on their robot during first Aves bell. Both students have a love of Computer Science and Programming, and although Bryant is new to the club, he has had experience building computers on his own; furthermore, he was a member of his old school’s Science Olympiad Team. “I build computers as a hobby, but I’ve not really done robotics, so it’s nice being able to come in and being able to work during Aves bell,” Bryant said.

The SHS Robotics Club was started two years ago by junior Nick McDonough, who convinced Computer Science teacher Mr. Mel Hoffert to be the club’s sponsor.

McDonough is also an avid computer science student, and throughout his high school career, he has taken Computer Science Principles Accelerated, Information Science, and Advanced Topics.

“I’ve always liked science and technology and wanted to start a club to encourage that in lots of students and also allow other students to compete,” McDonough said.

The club members work to build a robot that will compete starting in January 2018. During competitions, the team and their bot will be paired with one other school against two other competitors.

The competitions consist of a set of five matches, with each match randomly pairing up different schools. Each set of teams will maneuver their robots to complete certain tasks such as moving boxes or picking up items.

“I’m new this year. I was looking for things to join. I saw several flyers, and I showed up at the informational meeting. I like what they were doing, and I’ve been here ever since,” said Phil Bryant, 11, new Robotics Club member.

The Robotics Club builds their robot starting at the beginning of the year, and they test their design before competition season through participation in scrimmages. Their last scrimmage took place on Wed., Nov. 8.

Members meet during their Aves/Lunch bells and after school in Hoffert’s room in a continuous effort to improve their robot and prepare it for competitions.

“My previous room was very small. We were spilled out into the hall to do robotics work; it was not a productive environment because we were so cramped.

“When they were remodeling Mr. Doug Mader proposed this would be a good space for us to use. They took the wall out that ran down the center of the class, which used to divide it into two rooms,” Hoffert said.

With the space allotted to the Computer Science room doubled, Hoffert has made a few minor upgrades to his classroom.

Along with rows of desks, the new room leaves space for couches and space to experiment with Virtual Reality (VR), a robot competition arena, and an area devoted to 3D printing.

“It lends itself more toward group work and teamwork, and it emulates the workplace. Far too often our classrooms don’t mirror what is in industry.

“I’m really in favor of things that are adaptable to group work and a collaborative environment, and my class setup better prepares students for the workplace,” Hoffert said when asked why he wanted to teach in a non-traditional classroom.