Beyond numbers with #MeTooK12 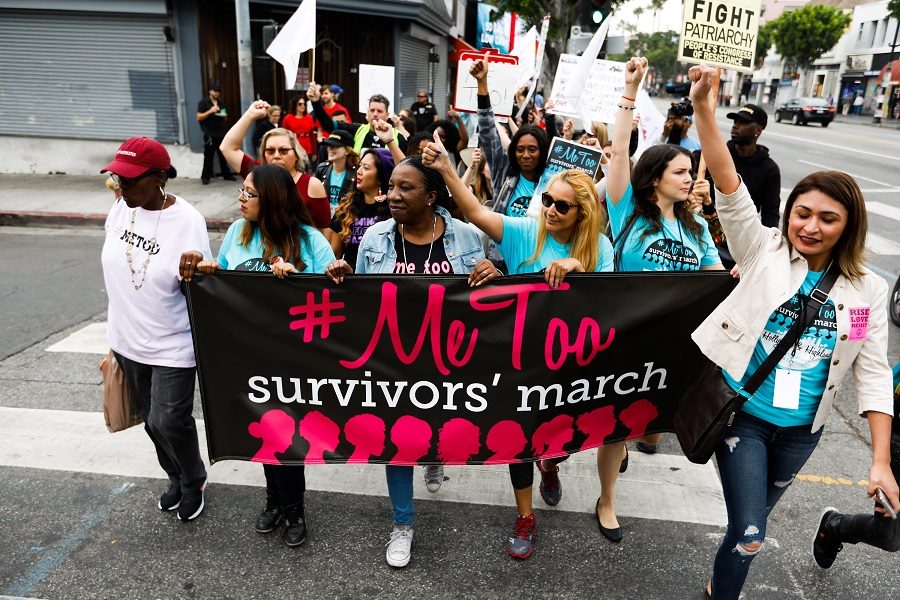 STANDING IN SOLIDARITY. Recently, the country has witnessed a rising wave of sexual harassment allegations as #MeToo gains momentum. The nonprofit organization Sexual Assault in Schools launched #MeTooK12 as an extension of #MeToo to bring light to the sexual harassment and assault that occurs in K-12 schools. “May we teach our children that speaking out without the fear of retribution is our culture’s new North Star,” said American actress Laura Dern at the Golden Globes ceremony. This comes after the Trump administration rescinded the Title IX guidance that directed schools to show transparency with their handling of sexual assault reports.

“My heart raced when an office attendant called my name and told me…that the male teacher had called specifically about me because I, a fourteen year old girl, was making him uncomfortable…

She is not the only underage victim of sexual harrassment.

Last year, the #MeToo movement and the successful public take down of several high-profile men helped bring to light the high prevalence of sexual harassment, assault, and misconduct in the United States.

It continues to gain momentum, as evidenced with the Golden Globes’ black-out and the call for lawmakers to wear black to the State of the Union.

But one area has not been largely involved in this wave of solidarity and support, at least until now: education, particularly K-12 education.

The national nonprofit organization Stop Sexual Assault in Schools (SSAIS) created a new hashtag, which it officially launched on January 9. #MeTooK12 was created to encourage those who were sexually harassed or assaulted while in grades K-12, particularly young people, to speak out.

“Sexual harassment is not just an adult issue. It’s time to talk about K-12 sexual violence. From @ssaisorg comes #MeTooK12,” tweeted Chellie Labonete, a member of the SSAIS Advisory Board.

The intention is to highlight sexual harassment and assault in elementary, middle, and high school and push for more openness and accountability, an issue that has not received the attention that harassment on college campuses and in the workplace has.

First and foremost, sexual harassment is occurring at the K-12 level. This is not an issue that’s only relegated to college campuses or other workplaces.”

“First and foremost, sexual harassment is occurring at the K-12 level. This is not an issue that’s only relegated to college campuses or other workplaces.

“It’s something that’s happening early in our student’s lives, and there is a real imperative for us to do something about it,” said Anne Hedgepath, interim vice president of public policy and government relations of the American Association of University Women (AAUW), to USA Today.

SSAIS was started by Esther Warkov and Joel Levin, parents who say their daughter was sexually assaulted by a classmate on an overnight field trip in 2012 when she was a high school student.

The two fought to get the school to take action, one that eventually ended with a settlement.

“It’s so sad that schools are not willing to punish offenders. Instead, they seem to be saying that sexual harassment is okay, that ‘boys will be boys,’” said Jodie Lawson, 12.

In the 2010-2011 school year, nearly 50 percent of students in grades seven to 12 reported experiencing some form of sexual harassment, according to research conducted by AAUW.

What Sycamore does in response to suspected abuse

Resource Officer Paul Payne is in the building for any such instances. Abuse (and other misdemeanors and felonies) and suspected abuse can be reported to him.

For those who have been abused or harassed, there are counselors and support groups that re in place in the building for students to come to if they need any help.

If you are a victim of any kind of abuse or sexual harassment or suspect someone of being abused or sexually harassed, please tell a staff member, talk to Officer Payne, or call one of the numbers below.

But the problem is obscured due to under-reporting by students and by schools and school districts, which has resulted in the public overlooking the problem.

In fact, only about nine percent of sexually abused teenagers ask for help.

And even when students report sexual harassment, “67 percent of local education agencies reported zero allegations of sexual harassment or gender-based bullying,” according to data collected by the Department of Education’s Office for Civil Rights for the 2013-2014 school year.

This is partly due to the fact that K-12 school officials are not as familiar with the correct protocols when it comes to handing reports of sexual harassment, misconduct, and abuse.

“Colleges and universities are much better equipped than elementary, middle, and high schools because of how often these allegations have come to light in the previous years,” said Rishav Dasgupta, 12.

But this is why #MeTooK12 is there. It helps shine a light on the issue and encourage students to seek help.

I want all the girls watching here, now, to know that a new day is on the horizon.”

There is hope for the future.

“I want all the girls watching here, now, to know that a new day is on the horizon.

“And when that new day finally dawns, it will be because of a lot of magnificent women, many of whom are right here in this room tonight, and some pretty phenomenal men, fighting hard to make sure that they become the leaders who take us to the time when nobody ever has to say ‘Me too’ again,” said the American media proprietor Oprah Winfrey in her famous Golden Globe speech.