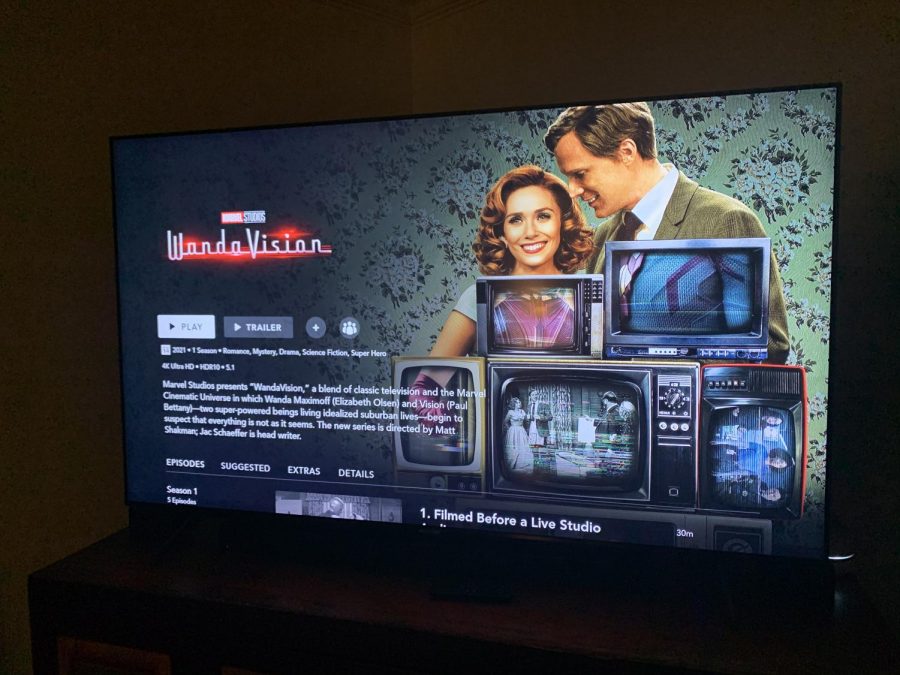 Five episodes of “Wandavision” have been released on DisneyPlus. This show is full of intrigue and is very intriguing and a new take on a subtle homage to sitcoms through the decades.

On Jan. 15, 2021, the first two episodes of “Wandavision” premiered on DisneyPlus. Every Friday since then, fans look forward to watching the newest episode. Currently, there are five episodes released, continuing the story of Marvel characters Wanda and Vision (as I bet you figured out through the title).

Before I continue with my review of the show so far, I feel the need to mention the level of Marvel fan I am because there is quite a spectrum. On the scale of ‘I’ve never seen a single Marvel movie’ to ‘I’ve watched them all 10+ times and I’ve read the comics and I look for Easter Eggs in each movie’, I’m probably pretty close to the middle. This past summer, I binge-watched all the movies and I simply enjoy watching the movies for the sake of watching them, but I am a recent fan and I think that is worth noting.

The first three episodes of “Wandavision” feature Wanda and Vision’s life in suburbia taking on an homage to classic sitcoms throughout the decades, from the 50s to the current 80s. As the decades shuffle through, it leaves viewers looking forward to when the sitcom catches up to modern-day,

Personally, I was a little bored the first episode and couldn’t help but think “This is it? A sitcom that’s not even that funny about a perfect suburban family that happens to include Wanda and Vision?” I continued watching, however, because I knew with Marvel there had to be something more to it. By episode two and three, I, and the rest of the audience, realize that there is a lot more going on, seen in subtle hints.

This show is a case of “trust your audience”. The writers don’t spoon-feed you information. To see all the small hints they drop throughout the show which I believe is vital to loving the show, you have to pay close attention to anything and everything. I appreciate this because it makes the show more intriguing—it is up to me to figure out what is happening and, inevitably, make predictions.

It does take time to get into the show. As I mentioned, the first episode fell flat for me. There wasn’t enough intrigue to make me rave about it right off the bat. If you can make it to the next episode, more and more hints are dropped at the real storyline. Finally, episode four is where the audience gets a firm grasp on what we are watching. Not-so-spoiler spoiler: it’s not just a sitcom starring Wanda and Vision.

Episode five continues adding more intrigue and conflict to the story. There is still a lot more to come in this nine-episode season. There is not a clear villain yet: I’ve seen a few theories and there are hints but Marvel is known to pull fast-one and they have not explicitly created a villain. Needless to say, I am very intrigued and will definitely continue watching.

Overall, I really enjoy the show so far. The first episodes were a little rocky but the show started ramping up and ramping up quickly. The homage to classic sitcoms throughout the decades is not only something interesting and new to watch but also adds tremendous value to the plotline.

Another great thing about the show is the fan-involvement. It is so fun to watch one of Marvel’s productions at the same time as the rest of the fans around the world. Seeing the theories people share and figuring out what’s happening in the show collectively makes watching the show even more exciting.

“Wandavision”: should you watch it? I say definitely.

A review of the conclusion of the “Wandavision” Series

ENVISIONING AN END. Spoilers ahead. Coming from someone who is a huge fan of Marvel movies. I had high expectations for WandaVision. Did the show reach my expectations? Yes, kind of. Let me explain. Before I explain my thoughts behind WandaVision and spoil some important parts of the show, I highly recommend watching WandaVision. I would give it an 8.5/10, as my complaints about the show really only revolve around the many theories I heard and unrealistic expectations of the show.

Coming from someone who is a huge fan of Marvel movies. I had high expectations for WandaVision. Did the show reach my expectations? Yes, kind of.

Before I explain my thoughts behind WandaVision and spoil some important parts of the show, I highly recommend watching WandaVision. I would give it an 8.5/10, as my complaints about the show really only revolve around the many theories I heard and unrealistic expectations of the show (i.e. The Xmen making an appearance or other comic book characters being integrated within the Marvel Cinematic Universe (MCU)). One thing to remember about this show is that it is Wanda’s story. How she dealt with her grief and how she overcame it throughout the show. It is innovative and different from anything you have ever seen. To the common viewer who has never seen a Marvel movie, this show will not make much sense, so I recommend getting caught up on all your MCU movies first.

The first three episodes had this early T.V. sitcom vibe, which I did not mind, and the subtle details like the aspect ratio changing in between scenes from Sitcom style (which is 4:3 aspect ratio) to the MCU basic 2.4 aspect ratio. It was different and innovative. The story during the first three episodes was kind of bland but had this ominous vibe to it that kept me coming back week after week. Every episode seemed to have a cliffhanger or minor reveal—which I hated. Viewers had to wait a week for a new episode to come out, something that I actually thought gave a nice pace to the show. We had something to look forward to at the end of each week instead of binge-watching the show in a day. After the reveal of Fox’s Quicksilver in episode five, for example, viewers were left on a huge cliffhanger, speculating for a week about different theories. However, in my opinion, this huge cameo in WandaVision just seemed useless and like a throwaway moment of the show. This is one of my main complaints. This would have been an awesome moment done right, like if they had introduced Mutants or The Xmen in the MCU, but again this was just wasted potential.

Now the series finale, or in other words—the climax. Needless to say this was a perfect ending. Wanda came to terms with her grief and knew what was best for her and the people of Westview. She took down her reality, which caused Vision and her kids to “die” and she left the show at peace, something I really enjoyed about the finale. Even the action was enough to keep me satisfied.

Overall I really enjoyed this show and am really looking forward to future Marvel projects such as Falcon and The Winter Soldier, coming to Disney+ in less than 2 weeks.