Attacks serve as ‘game-changer’ for world 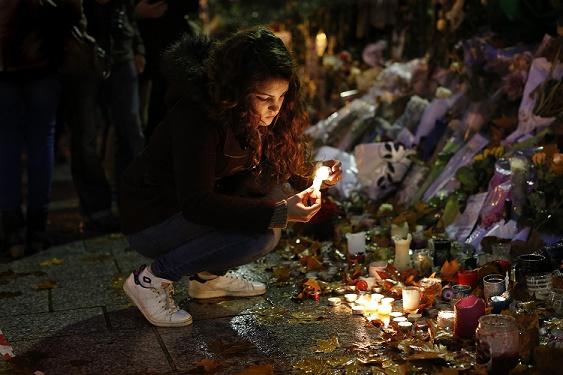 Just one week after the terrorist attack at the Bataclan Theater in Paris, civilian Laura Cappia lights candles in remembrance of the 89 people who died. Cappia was nearby when the shooting occurred. However, while there was much remembrance and outrage by the people in response to the Paris attacks, not much was done when the attacks in Lebanon occurred on Nov. 12.

The terror attacks in Paris were not only a horrifying event, but they also revealed the realities in the fight against ISIS.

They showed the devastation that can result from bombing “soft spots,” open areas where people would go to hang out.

AP European History teacher Mrs. Leah Chapman said, “These were people going about their daily lives. The attacks were not on government buildings or train stations.”

The scary thing is that this is not something new.

Chapman said, “This kind of thing happens in the Middle East all the time. The problem is that no one says anything about those attacks.”

Take, for example, the double suicide attack that occurred in Beirut on Nov. 12. Little was done in response to the deaths and devastation that happened.

As Lebanese doctor Elie Fares wrote on his blog titled “A Separate State of Mind,” “When my people died on the streets of Beirut on November 12th, world leaders did not rise in condemnation. There were no statements expressing sympathy with the Lebanese people.”

Both attacks served to show how far ISIS is willing to go to achieve their goal.

This is a major game-changer, at least for Europe.

Chapman said, “The area is usually so open. Now, everything will change in Europe, probably starting with security. The scary thing is that there is a high Muslim population in France because of their previous involvements in Africa.”

“They are not really integrated in French society. Basically, there is already lots of tension. These attacks are just going to make everything worse.”

As for the annual Europe trip, it is too early to see what effects or changes there will be.

Ovington said, “I’ve looked upon the situation. Surprisingly, there have not been a lot of calls or emails from students or parents. I am communicating with parents and talking with the French Safety PRC to see what will happen.”

Chapman said, “It’ll be interesting to see the differences between last year’s and this year’s trip [if the trip does go on]. I remember how there were refugees selling tourist items on the streets.”

“But now? What will security be like? And, what will have happened to the refugees by then?”