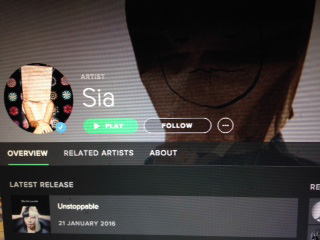 All of Sia’s singles from the upcoming album can be found for free streaming on Spotify. Her other six albums, ranging from 2003-present are also available for streaming. You can pre-order the album on iTunes for 10 dollars.

The mysterious pop artist is releasing her next album, “This is Acting,” on Jan. 29, which will be her seventh album. The album is based off of songs that Sia wrote for other artists and not herself.
Sophomore Kate Willis said, “I remember hearing her song ‘Chandelier’ on the radio a lot over the summer, and then I have recently heard her new one [‘Alive’] also and liked both of them!”
The Australian singer-songwriter is known for always wearing a wig and not showing her face; and there is a reason behind that she has explained.
She feels like it allows her identity to be protected so that she can go out into public without worrying about her presence too much.
Willis said, “I think that it is cool how she hides her identity from the world because then when she goes out in public without the wig on, it is like she is just another random person in the street.”
The last single from the album, ‘Unstoppable’, was released on Jan. 21, and is one of five other singles. ‘Alive‘ has become the leading single from the album and was co-written by and for Adele.
Willis said, “The name of the album is interesting because it is like she is not talking about her own life but the life of someone else that she is pretending to live through her experience of the songs not being about her own life.”