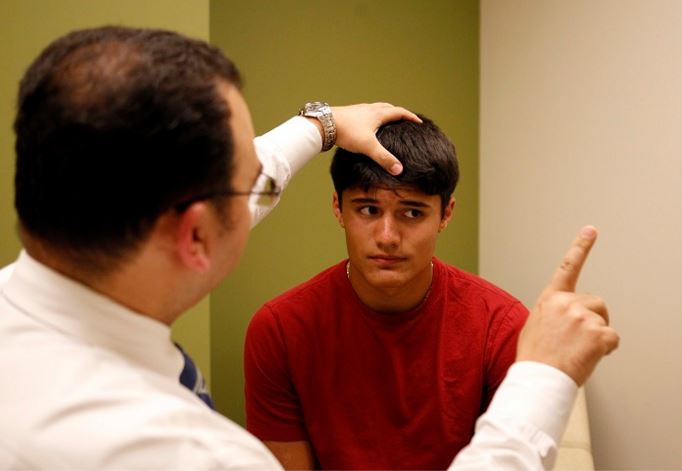 According to The Journal of Athletic Training (JAT), there are an estimated 300 000 sports-related traumatic brain injuries, mainly concussions, that occur annually in the United States. Sports is the second leading cause of traumatic brain injury among people age 15 to 24 years, closely following motor vehicle crashes. They are hard to diagnose, but in the near future, blood tests may make this process easier.

One in five high school athletes will sustain a sports concussion during the season, the number rapidly increasing over the past years.

In fact, the American Academy of Pediatrics reported that emergency room visits for concussions in kids age eight to 13 has doubled and concussions have risen nearly 200 percent among teens age 14 to 19 in just the last decade.

When a concussion goes untreated or undertreated, it puts the patient at risk of a more serious injury. This is why students and adults are asked not to return to class or work until the symptoms are resolved.

And concussions are difficult to diagnose; symptoms often do not appear for hours or days after the injury and imaging technology can only pick up large bleeds and lesions.

Dr. Greg Canty, a sports medicine specialist with Children’s Mercy Hospital, told Fox4 News, “Concussion is a very challenging diagnosis in that we don’t have a blood test, we don’t have a radiology test like an MRI, a CT scan.”

This all may change in the not-so-distant future.

According to a paper published in JAMA Neurology on March 28, someday a simple blood test may be used to detect concussions.

This is attributed to a protein linked to head trauma that may be present in blood up to a week after the injury, which could help diagnose patients who delay seeking treatment.

The study involved 600 patients treated at Orlando Regional Medical Center. Nearly half of them suffered head injuries that resulted in disorientation, unconsciousness, or amnesia while the rest had fractures or other types of non-brain trauma.

Researchers drew the participants’ blood when they were initially admitted and at regular intervals in the days following to analyze how the levels of biomarkers glial fibrillary acidic protein (GFAP) and ubiquitin C-terminal hydrolase L1 (UCH-L1) changed over time.

Dr. Linda Papa, Orlando Health emergency medicine physician and co-lead author of the study, said, “The markers we are looking at are really specific to the brain and not released from any other part of the body which is what it makes them so unique.”

These biomarkers are released into the bloodstream in the event of a head injury.

The markers could help diagnose patients in emergency rooms, those that later display symptoms, and even those injured at sports events.

Although it will likely be a few more years until a concussion blood test based on the two proteins can be in routine use, these new findings are a major step in this field.

Papa said in a statement, “We have so many diagnostic blood tests for different parts of the body, like the heart, liver and kidneys, but there’s never been a reliable blood test to identify trauma in the brain.”

“We think this particular test could change that.”