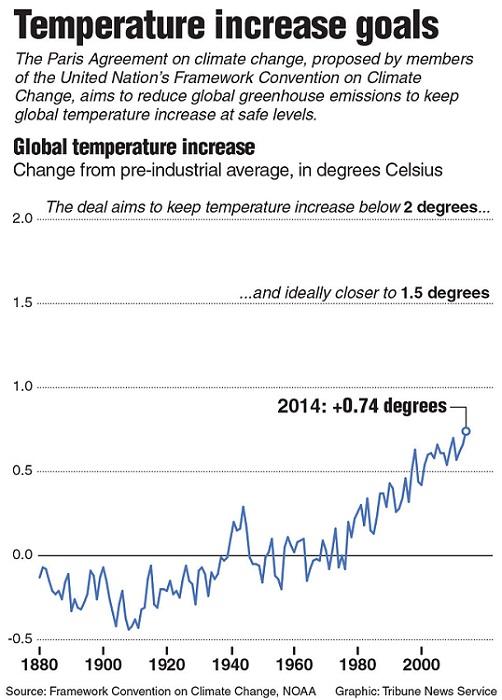 Global warming has been a major issue for quite some time. In December of 2015, 195 countries had met at the Paris climate conference and adopted the first universal global climate deal.

The agreement set out a plan operating on global action to avoid dangerous climate change by limiting the increase in global temperatures to well below two degrees Celsius in comparison to pre-industrial times.

On Earth Day, April 22, this deal was taken to a new level.

A total of 175 countries signed the landmark Paris Climate Agreement at the United Nation’s (U.N.) headquarters in New York City, a major milestone for climate change.

With current global temperatures reaching record levels, resulting in melting glaciers and a disconcerting rise in sea levels, there is overwhelming pressure for the Paris Agreement to go into force and have countries take action.

After all, words will not save the planet.

U.N. Secretary-General Ban Ki-moon said in his opening speech at the U.N. signing ceremony, “The world is in a race against time. The era of consumption without consequences is over.”

“Today you are signing a new covenant with the future. This covenant must amount to more than promises.”

The agreement will be enforced once 55 countries representing at least 55 percent of global emissions have formally joined it, which was initially expected to take until 2020.

However, recent developments may allow it to happen within a year or two.

15 countries, mostly islands, have already fully approved the agreement and will present ratification to the UN. This includes Tuvalu, which has seen four of its small islands disappear into the Pacific since 2000.

The European Union (EU) energy chief Maros Sefcovic has said that the EU also wishes to ratify the deal.

And on behalf of the world’s least developed countries, Congo President Joseph Kabila has said they were all committed to the deal and looking to ratify the agreement as soon as possible.

According to the World Resources Institute based in Washington, at least 25 countries representing 45 percent of global emissions have either joined the agreement or committed to joining it early.

The signing of the agreement set a record for international diplomacy, as reported by The Washington Post. Even North Korea’s Foreign Minister Ri Su Yong appeared to sign. Nations that did not sign have a year to do so.

The world is now watching. You will either be lauded by future generations or vilified by them.”

As found by the World Resources Institute, those who have not shown an indication to sign include the large oil producers such as Saudi Arabia, Iraq, and Nigeria.

The Paris Agreement is a breakthrough in U.N. climate negotiations, which has been slowed by disputes between developed and developing countries over who should do what.

It has countries set their own targets, to be updated every five years, for reducing their emissions of greenhouse gases.

Professor Nicholas Stern, head of the climate change institute at the London School of Economics, said to the nations’ representatives, “We have a once-in-history opportunity to create a new, shared, inspiring and sustainable world. If we delay, it will be gone.”

“If we do get it right, we will launch a new wave of dynamic innovation and growth in the medium-term. The consequences of getting it wrong are unthinkable.”

The ultimate goal is to protect future generations, a hope symbolized when U.S. Secretary of State John Kerry carried his granddaughter as he signed the agreement.

The only way to attain this is for everyone, all nations, to work together and help each other transition from fossil fuels to clean fuel.

As Zimbabwe’s President Robert Mugabe said at the conference, “Life itself is at stake in this combat. We have the power to win it.”

Dicaprio said at the ceremony, “We can congratulate each other today, but it will mean absolutely nothing if the world’s leaders gathered here go home and do nothing. No more talk, no more excuses, no more ten-year studies.”

“The world is now watching. You will either be lauded by future generations or vilified by them.”