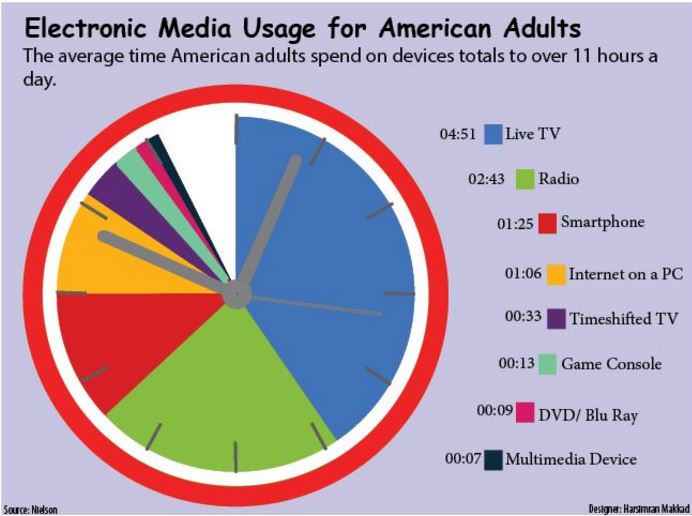 American adults spend, on average, more than 11 hours a day using electronic media. Considering that people are typically awake around 16 to 18 hours a day, 11 hours of digital time is a massive percentage of the day. The increasing use of technology has various negative impacts on people’s health and abilities including attention span, retention, sleep, and social skills.

Technology has been increasingly incorporated into the modern world.

In fact, according to Nielsen’s Total Audience Report, the average American adult spends more than 11 hours a day watching TV or using cellphones and other electronic devices.

For American teens, this number is closer to nine hours a day.

This sheer amount of time spent on technology, especially on cellphones, has had devastating impacts. According to a study conducted by Microsoft, the age of smartphones has left humans with a shorter attention span than goldfish.

Researchers surveyed 2000 Canadians and used electroencephalograms (EEG) to study the brain activity of 112 others.

Their findings show that the current average human attention span is eight seconds, compared to 12 seconds in 2000 (when the age of smartphones began). Meanwhile, goldfish have an attention span of nine seconds.

According to Time, the study said, “Heavy multi-screeners find it difficult to filter out irrelevant stimuli — they’re more easily distracted by multiple streams of media.”

Microsoft believed these changes were a result of the brain’s plasticity, or its ability to adapt and change itself over time; thus, a shorter attention span may be a side effect of evolving to a mobile Internet.

However, it is important to note that this occurs over a long period of time.

“They’re better at identifying what they want/don’t want to engage with and need less to process and commit things to memory.”

On the positive side, researchers did find that people’s ability to multitask had improved, reflecting back on the findings of earlier studies.

A previous study conducted by the National Center for Biotechnology Information and the National Library of Medicine found that 79 percent of respondents in the United States regularly “dual screen” by using portable devices while watching TV.

Bruce Morton, a researcher with the University of Western Ontario’s Brain and Mind Institute, suggests that this is a result of people’s cravings for information.

Morton told The Telegraph, “When we first invented the car, it was so novel. The thought of having an entertainment device in the car was ridiculous because the car itself was the entertainment.”

“After a while, travelling for eight hours at a time, you’d had enough of it. The brain is bored. You put radios in the car and video displays. Why?”

“Just because we may be allocating our attention differently as a function of the technologies we may be using, it doesn’t mean that the way our attention actually can function has changed.”

Now, congratulations! You were able to concentrate long enough to make it through this article!