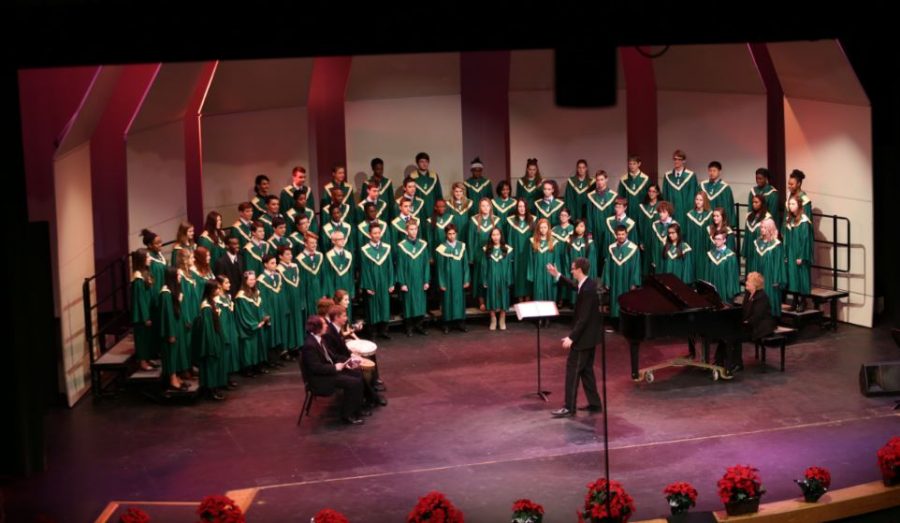 Last concert, the choirs stunned audiences with their bright sounds and joyful music. The year-long process of preparation and improvement ends at the Spring Concert. The awards ceremony at the end of the concert celebrates achievements and honors seniors for their contributions.

After a successful season with three concerts, two competitions, and one variety show, the Aves Choir is wrapping up their year with one final spring concert.

This concert is only two weeks after the choirs competed at the state level Ohio Music Education Awards, where all three choirs earned top ratings. Aviator Chorale earned a two, Bella Voce earned a two, and Select Ensemble earned a one.

Sophomore Hannah Leonard said, “With such little time between the competition and the concert, we have to work effectively to be able to prepare and clean our pieces.”

Bella Voce will be singing the pop hit “Rather Be” with accapella style vocals and choreography. They will also be singing the traditional Serbian song, “Niska Banja.”

Sophomore Leslie Brown said, “It’s cool to be able to experiment with various forms of music. Sometimes we sing in different languages and in different styles.”

The last concert is also combined with the Aves Choir Awards Ceremony. After the concert, awards will be given out to students who showed particular dedication to the program.

Awards are given to reward the outstanding 1st, 2nd, 3rd, and 4th year members as well as special awards for each ensemble and scholarships for seniors.

Choir Director Ken Holdt said, “Awards are given to students who excel in all aspects of choral life. The Unsung Hero Award will be given to a student who doesn’t call attention to themselves but shows excellence in everything they do.”