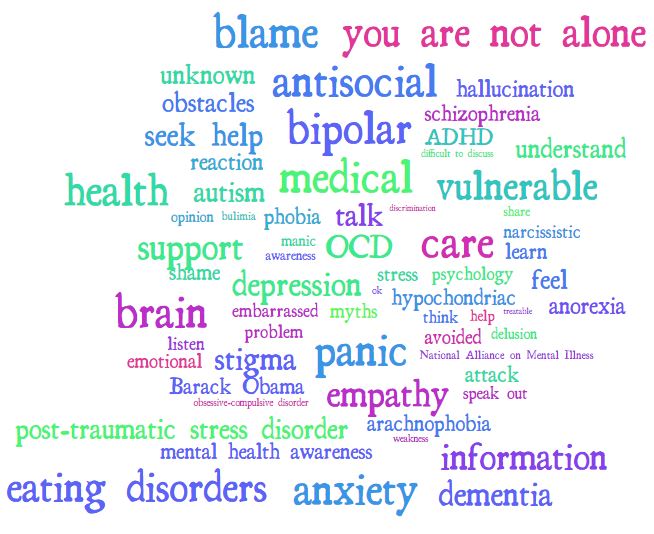 Ana Landa, who is afflicted with a mental illness, describes her situation with these words: “Mental Illness: We feel ALONE because we have lost loved ones, families, friends, jobs, and it has created broken hearts and shattered dreams. We feel extremely UNWANTED for something we didn’t ask for and trying so hard to cope with. Believe us, if we can snap our fingers and make it disappear it would be a wish come true; but that ONLY happens in FAIRY TALES.”

Each year, one in five adults in the United States experiences mental illness, according to the National Institute of Mental Health. This is equivalent to about 43.8 million people.

It is a serious issue for the public, and it affects the future. Nearly one-third of students with mental health issues drop out of school

President Barack Obama said in his Mental Awareness Month proclamation, “Our Nation is founded on the belief that we must look out for one another… we do a [great] service…when we reach out [to] those struggling with mental health issues.”

May 2016 is the 67th Mental Health Awareness Month. This year, the nonprofit organization Mental Health America is promoting the theme “Life With a Mental Illness” to clear common misconceptions about various mental health issues.

Paul Gionfriddo, president and CEO of the organization, told Tech Times, “Sharing is the key to breaking down the stigma surrounding mental illnesses and to showing others that they are not alone in their feelings and their symptoms.”

A mental illness is any condition that impacts one’s thinking, feeling, or mood and possibly his or her ability to relate to others and function on a daily basis, according to National Alliance on Mental Illness (NAMI).

It can impact people differently, even those with the same diagnosis.

Sophomore Stephanie Hong said, “So many people don’t really understand what ‘mental illness’ means; they hear the words ‘mental illness’ and automatically think, ‘Uh oh. Stay away from that person.’ And that’s not the right thing to do.”

To combat this issue and raise awareness, Mental Health America is encouraging the public to share what mental illness feels like to them with the hashtag #mentalillnessfeelslike.

Sociologist Dr. Neal Houston once said, “I encourage everybody to spend a few moments educating themselves and learning more about the signs and symptoms of mental illness; by doing so, you could help save a life, [maybe] even…your own.”

There are other ways you can get involved with spreading awareness and helping change people’s perceptions of mental illnesses. One way is to take the NAMI pledge.

Another way is to download this proclamation and forward it to your city leader to have it read at local events.

Obama said, “This month, we renew our commitment to ridding…society of the stigma associated with mental illness, encourage those…with mental health conditions to get the help they need, and…[provide them with] access to…support, acceptance, and resources.”

“…we recognize those Americans who live with mental illness…and we pledge solidarity with their families who need our support as well.”

“[Let’s ensure that]…people…with mental health conditions know that they are not alone, that hope exists, and that the possibility of healing and thriving is real.  Together, we can…[get] everyone…the support they need to recover.”