Speaking out against sexual harassment equals catalyst for change?

Women, men (can) bring about new era by joining together, saying ‘Me too,’ ‘Time's up’ 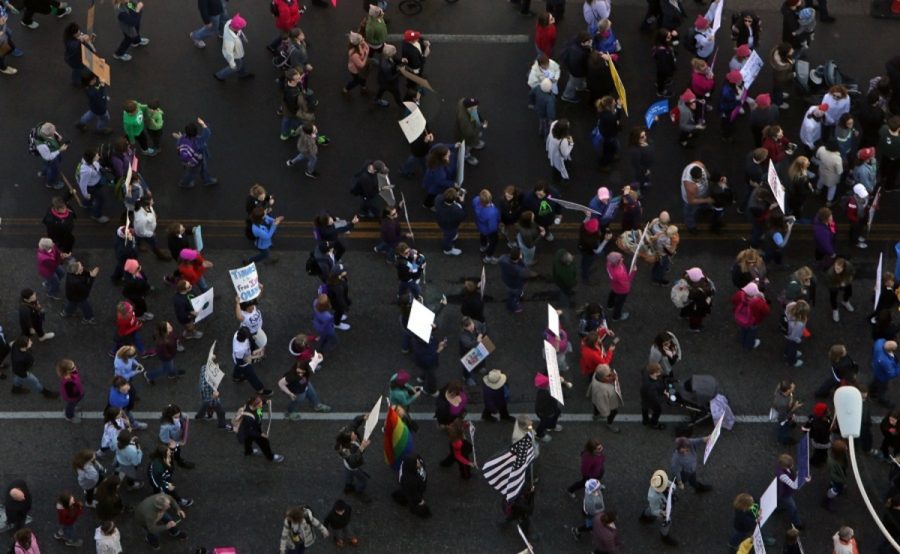 TIME’S UP. The #MeToo movement along with its branches #MeTooK12 and Time’s Up continues to gain momentum, bringing awareness to the issues of sexual harassment and the dominance of wealthy men. This also sheds light to the gender disparity apparent in American society. For change to happen, particularly beginning in 2018, both men and women must join together and speak up.

Or perhaps it will be the year of change, starting with the #MeToo movement and its 2018 progeny Time’s Up.

Since actress Alyssa Milano urged victims of sexual harassment and abuse to come forward with the now-famous hashtag, Twitter and Facebook have both received a wave of responses, with nearly a million tweets within the first 48 hours, a number that is steadily growing.

The #MeToo movement continues to gain momentum with the Golden Globes’ black-out, the rise of the branching #MeTooK12 movement, and the call for a black-out at the State of the Union address.

The massiveness of the movement, highlighting the experiences and outraged cries of women and men alike, serves as a stark reminder that sexual misconduct is extremely prevalent in the United States, that we should not be pushing this aside.

This comes as sexual assaults on Ohio’s college and university campuses are on the rise from previous years.

The most recent statistics found that at the Ohio State University (OSU), the largest university in Ohio, the number of rapes reported more than doubled from 25 in 2015 to 61 in 2016, according to OSU’s annual report.

Meanwhile, in a recent campus climate survey conducted at OSU, 20 percent of female undergraduates experienced “nonconsensual sexual contact by physical force, threats of physical force or incapacitation,” according to “The Columbus Dispatch.”

And this does not include male undergraduates.

This does not begin to include the sexual misconduct that occurs in the workplace or at elementary, middle, and high schools.

Yes, there is obviously a difference between rape and the sleazy advances of men such as Harvey Weinstein and Kevin Spacey.

But these acts of sexual violence represent a major flaw in our society: the fact that prominent and wealthy men can wield their influence and commit such atrocities without fear of reprisal because people often look the other way.

Not only is this an appalling abuse of power, but it also a sad reality that will continue unless we do something about it.

Because let us face it, no matter how much we Americans pride ourselves on providing equal and fair treatment to everyone, the gender equality we claim to have does not exist at multiple levels of American society.

Men still tend to receive a higher pay than women and hold a majority of leadership positions. And though 53 percent of the U.S. population is female, only 23 percent of women hold government office.

Such a blatant disparity makes the future for women appear bleak. After all, how can women even begin to change the general societal view and advance their interests if men continue to dominate the institutions responsible for bringing about change?

No matter how much we Americans pride ourselves on providing equal and fair treatment to everyone, the gender equality we claim to have does not exist at multiple levels of American society.”

So it is not shocking that victims of sexual harassment and assault traditionally remained silent. Either their claims are dismissed as untrue or not serious or they are accused of encouraging unwanted behavior.

And this goes for men as well. Male victims of sexual misconduct go through similar situations, possibly even worse as they are seen as “weak” and “not masculine enough.”

Ironically, the increase in rape reports could be a positive sign. Rather than meaning colleges and universities are unsafe, this could be an early indication of an open culture where victims will be believed and action can be taken.

We need to ensure that this culture is continued, that the #MeToo movement does not fade into the background again like it did ten years ago after it was begun by the African American activist Tarana Burke.

Instead of focusing on who the president offends or what he tweets, we should concentrate on mending the cracks and bringing about change to a society that has been dominated by wealthy, powerful men for far too long.

#MeToo and Time’s Up are only a beginning.

Of what? Well, that is up to us to define.

Only then will this movement become the long awaited turning point that will permanently alter the societal landscape. Only then will a new era begin, an era where the actions of men who boast of violating women will not go unpunished.