‘My daughter Jaime was murdered’ 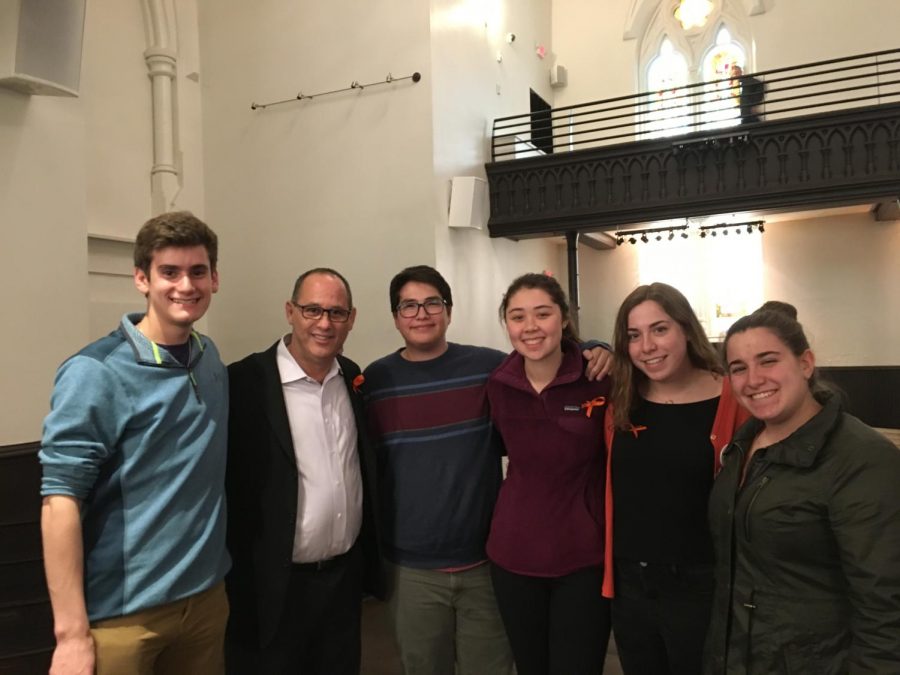 LISTEN. Fred Guttenberg visits Cincinnati to share the story of his daughter Jaime Guttenberg, who was murdered in Parkland, Florida. Guttenberg has close family who lives in Cincinnati. Fellow teens from around the area with L.A.S.T (lobbying for a safer tomorrow) came to listen to his words and speak with him directly. “My daughter Jaime had a favorite quote: ‘Dreams and dedications are a powerful combination.’ Well, I have a dream. My dream is that we [will] be able to walk in the hall without [a] fear of being shot. And I plan to dedicate every minute of my time to making sure this happens,” Guttenberg said.

Cincinnati residents had the privilege to listen to the words of Fred Guttenberg, a man on a mission, at The Transept in Over the Rhine. The event was hosted by the Hamilton County Democratic Party.

“February 14, which is Valentines Day, the day of love, started off in my house like any other. For my family members here, you will know what I say when I say with chaos. We were making sure the kids got off the school, and as usual, they were running late.

“The dogs were barking and needed to be taken care of, and my wife and I needed to get out the door to do our work. That’s what I remember about that morning. It’s what I can’t remember that will haunt me for the rest of my life.

“So my kids left for school that day like any other day, and only one of them would come home. My daughter Jaime [Guttenberg] was murdered, or as they like to say in the gun culture, ‘hunted’ in school.

“Jaime was the toughest person I knew, and she fought for her light until the very last second, running down the hall from an active shooter until ‘BOOM!’ A single shot to her side severed her spinal cord. On Valentine’s Day, the last time I saw my daughter alive, I can’t remember if I ever told her that I loved her that morning,” Guttenberg said.

Everyone says, ‘Give it time. It’ll get easier.’ It doesn’t. I miss my kid more with every passing day.”

Guttenberg also spoke about life without his daughter, about how things have dramatically changed for him forever and about how her spirit must live on.

“Everyone says, ‘Give it time. It’ll get easier.’ It doesn’t. I miss my kid more with every passing day. Jessie [Guttenberg], who is my son, my wife Jen [Guttenberg], and I have to go on without Jaime in our house. Our family and friends who lived for her voice and spirit will not feel it ever again.

“Our home is different. Her humor, her craziness, her energy, and her feistiness are all missing. My baby girl was the energy in our house. She was the energy in every room she ever went into. Our new normal is a lot quieter.

“I miss the sounds of her laughter, her unbelievable ability to never stop talking, and how quickly she would say things because she always had so much to say. They were the sounds that gave our lives meaning, that gave our house energy.

“Jaime lived life. She loved the energy in the room, and she always made her presence known.

“Jaime was also a competitive dancer. This was her passion. Rather than doing things now like competition weekends or days filled with other special moments, my wife and I now spend our days revolved around a visit to a cemetery,” Guttenberg said.

Since the murder of his daughter, Guttenberg has taken a public role in the gun violence prevention society. He has has shifted into a more public life, sitting down with multiple legislators including governors John Kasich of Ohio, Rick Scott of Florida, Phil Murphy of New Jersey and a heated conversation with senator Marco Rubio.

“The day after [her] murder, I attended the vigil in Parkland. I was asked if I wanted to speak, and I said ‘yes.’ I had not prepared [anything], but I had a lot I needed to say. It was the beginning of my public life.

“My life is now forever changed as my public life continues to evolve. I’ve dedicated the rest of my life to fighting for the cause of gun safety, and I will not stop.

“No other parent or family should go through what my family and 16 other families are going through. And that’s just of the deceased. Let’s not forget that there were 17 families with serious injuries that needed to be attended to as well.

She had rights as well. She had a right to life.”

“This has become something that has become way too common in our culture. This time, the gun rights crowd messed with the wrong community [and] the wrong kids on the wrong day. My kids were everything to me. And I intend to be apart of breaking the gun lobby.

“There are simply too many shootings, losses of life for us as a civilized society,” Guttenberg said.

From the perspective of a parent who lost a child from gun violence, Guttenberg provides a unique insight into common sense gun legislation. A common belief is that those who fight for gun legislation are anti-Second Amendment. However, Guttenberg spoke about his view on this issue.

“You can’t allow a gun lobby that truly believes in no limits to control the decisions of lawmakers because no other person should be afraid of being shot for simply being in school or some other public place,” Guttenberg said.

Following Gutenberg’s speech was one given by congressional candidate Aftab Pureval. Pureval shared his story and views on gun violence as a millennial.

“I was in high school when Columbine happened. I remember the incredible fear that day returning to school, totally terrified…about what could be waiting for me there. The world changed that day…for so many of us, and we looked to our leaders in Washington D.C. to do something to keep us safe, to curb the epidemic of gun violence.

“But they did nothing. I was in college when the Virginia Tech shooting happened, and they did nothing. I am a product of the school shooting generation, and I’m 35 years old. From Sandy Hook to now Parkland, this madness has continued over and over again and our leaders in D.C have done nothing.

“Whether you’re new to politics or not, whether you’re of voting age or not, it’s on us to get out, to get organized, to get energized, to knock on the doors, to make the phone calls, and to show up in November and demand change and demand accountability.

“IT’S ON US. No one else is going to do it for us. We want to honor their memory and make sure that this time it’s different. And it’s on us to do it,” Pureval said.