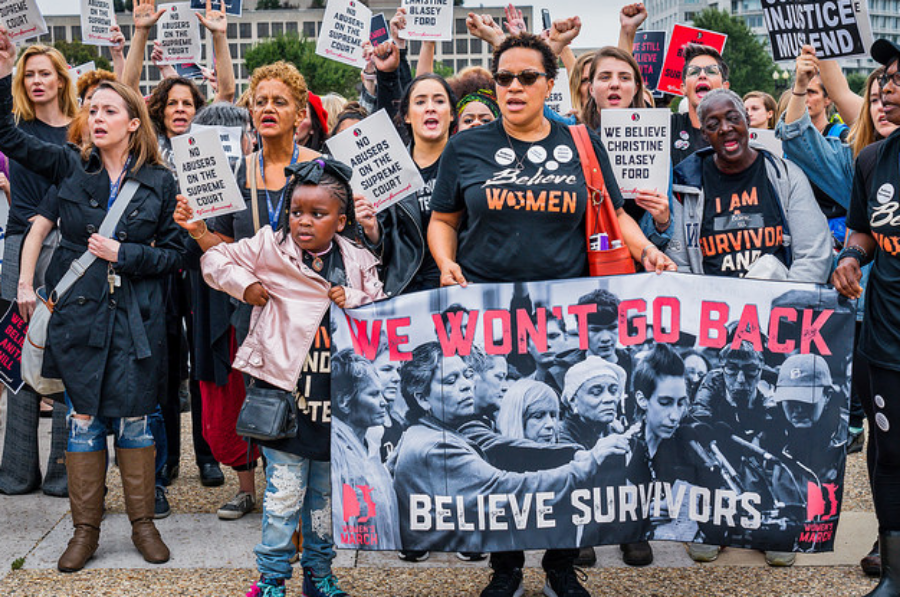 BELIEVE IN WOMENKIND. Women have protested Brett M. Kavanaugh’s appointment since before he was accused of sexual assault, although a nominee cannot be voted against because of political differences. Various protesters even interrupted the hearing to yell and disrupt the proceeding to beg senators to vote no. “I know there are some new allegations, so if the investigation is prolonged with a reasonable amount of evidence, then that would make sense. After the primaries is out of the question,” said Alaina Delsignore, 10.

On Fri., Sept. 28, a man took another step towards the highest court in the land. The judiciary committee, in charge of overseeing and approving justices for the Supreme Court, approved Judge Brett M. Kavanaugh 11 to 10. He now moves to be confirmed by the full Senate.

After voting to approve, Senator Jeff Flake stated that he would not vote for Kavanaugh on Oct. 5 (when the confirmation vote is set to happen) unless an FBI investigation is called.

Note that it was Dr. Christine Blasey Ford and the Democrats on the panel requesting the FBI investigation. The White House has ordered the FBI to do a limited investigation that must be concluded by the Friday vote.

“I do support the investigation because there might be evidence that can come up to actually convict him. However, more than a week of postponing is just pleasing the Democrats and would seem unproductive to both the Supreme Court election and American people,” said Alaina Delsignore, 10.

According to BET, Senator Kamala Harris said in the hearing to Ford, “You are not on trial. You are sitting here before members of the United States Senate’s Judiciary Committee because you had the courage to come forward, because, as you have said, you believe it was your civic duty.”

Ford has courageously come forward, and it is not for the American people nor the judiciary committee to determine guilt or innocence. Due to Flake’s plea for an FBI investigation, though a very limited one is taking place, there will be a search for the truth.

The code of conduct for U.S. Judges states that judges must “maintain and enforce high standards of conduct and should personally observe those standards…”

Regardless of whether or not Kavanaugh assaulted anyone, he did not uphold to this standard, nor the standard the Supreme Court of the U.S. demands from its justices. From crying to yelling at senators to turning questions on senators, Kavanaugh did not act like a level-headed judge.

“I do not think you can deny someone a job based off of allegations that may be false. There is no evidence to convict him, and the alleged assault was when he was in high school. I would never support Kavanaugh’s actions, but Trump was still a nominee even though he had multiple allegations directed towards him. I just don’t see the difference between the two,” Delsignore said.

It is recognized that his potential job is on the line and he is against serious accusations, but imagine if a woman acted as he did? What verbs would be used? Hysterical? Perhaps so far as crazy or overly emotional.

For many, this hearing brought on flashbacks to Anita Hill’s allegations and judiciary committee after she stated that then-nominee Clarence Thomas sexually assaulted her.

The questioning of Hill is widely regarded and accepted as a stain on the Senate’s history, as the questions asked for graphic details and then they nominated Thomas. The following year (1992) was known as the “year of the woman” as women in large numbers ran for elected office.

Thomas was voted in. He still sits on the bench of the Supreme Court today.

Today, the Republicans on the judiciary committee for Kavanaugh are all white males, so they appointed a female prosecutor to take the Republican’s time to question Ford. Of the total 21 senators on the committee, four are women and all four of them are Democrats.

Something similar to the “year of women” happened after the election of President Donald J. Trump and since then we have gone (or still going?) through the Me Too Movement. Powerful men have fallen from the hierarchy but have people learned enough?

The patriarchy is in no means dead or gone, but one might have thought that around 30 years since Hill’s testimony would have been a learning experience. Yet, some of the same men still sit in the judge’s chair. Despite the woman prosecutor, the committee still came across insensitive and uncaring to women’s allegations.

“This is the most unethical sham since I’ve been in politics. And if you really wanted to know the truth, you sure…wouldn’t have done what you’ve done to this guy. Boy, y’all want power and I hope you don’t get it,” said Republican Senator Lindsey Graham during the hearing, referencing Democrats.

The U.S. has clearly learned little since Hill’s testimony.

Graham declared that the whole accusal and the process that followed was simply a power play by Democrats. It is disheartening that the possibility of someone having been a sexual predator is not relevant in a job interview and bringing it up is “unethical.”

It is ethical to hear out and investigate claims that a person for a job has committed a revolting crime. It is ethical to give respect to both the victim and the accused. It is unethical to turn it into testimony by the interviewers and a stage for a power display.

Flake was seen as a swing vote- he has no voters to appeal to anymore as he does not seek reelection. On his way into the hearing room Friday, women blocked his path and recounted their stories of sexual assault, one protestor stating “you’re telling me that my assault doesn’t matter [by voting for Kavanaugh],” according to CNN.

Flake still voted for Kavanaugh. Yet, he stated that there must be the investigation for him to vote to confirm.

Regardless of whether or not Kavanaugh is guilty, his conduct and temperament are not fitting for being on the highest court.