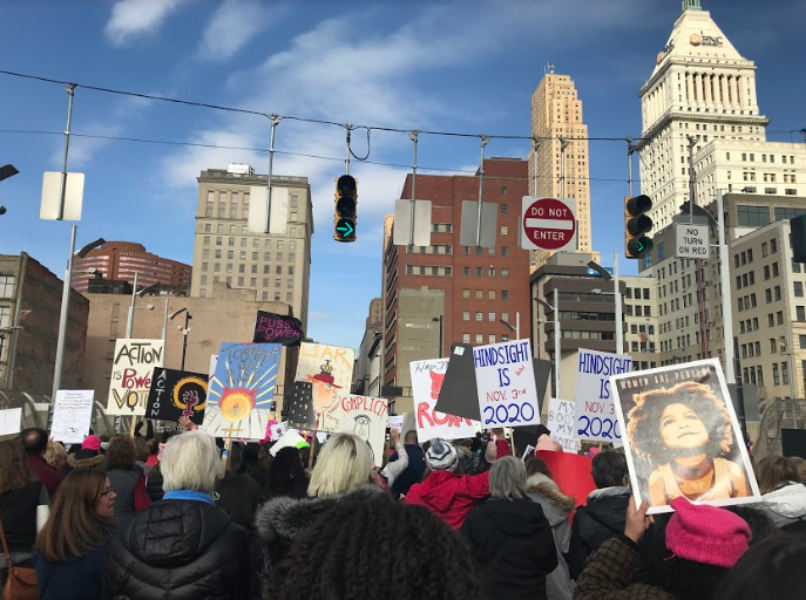 WHOSE CHOICE? Multiple other states have tried to pass and enforce heartbeat bills and their lawsuits are pending on their constitutionality. With a conservative-leaning Supreme Court, Roe v. Wade is in danger of becoming void. “In my opinion, there should be less strict regulation on the timeline of abortions considering it’s the mothers’ own body and her own choice,” said Lydia Cooke, 12.

The bill makes it illegal to perform an abortion after detecting a heartbeat. No exceptions were made for rape or incest. Passed by Senate 18 to 13, mostly on party lines and two senators were absent.

Three Senate hearings concluded with both proponents and opponents of the bill speaking to the committee. From NARAL Pro-Choice Ohio to Planned Parenthood, many organizations and citizens of Ohio turned to the hearing to express their thoughts on the bill.

“I do not agree with this bill at all. I am a firm believer in women getting to control their own bodies and having the right to choose. A baby may have a heartbeat but their eyes, brain, lungs, and other vital organs still are not developed,” said Grace Creek, 12.

A direct challenge to Roe v. Wade, the 1973 Supreme Court case protecting women’s right to abortions, lawmakers hope the bill will find its way to the conservative-leaning Supreme Court.

Two abortion bill sit on Governor John Kasich‘s desk, House Bill 258 and Senate Bill 145; the latter is another abortion bill that would ban a practice called dilation and evacuation (D&E), punishing doctors who practice them. The abortion method has been around since the 1970s and takes place at a later gestation period, from 13-24 weeks of pregnancy.

If passed, Ohio would become the tenth state to outlaw D&E. Seven of those states have had their laws suspended by the courts.

Lawmakers are not expecting Kasich to sign the laws, even going so far as to schedule an abnormal session on Dec. 27 to attempt to override any possible vetoes. Kasich has attempted to walk the edge of moderate conservativism, evident in his picking and choosing of what abortion bills to sign, however, the legislature is determined to pass severe abortion restrictions in the lame-duck period.

“I think that passing policy to regulate abortion can be beneficial for the baby, but not necessarily the mother. This new Ohio bill has the right intentions of trying to limit legal abortions with the heartbeat rule, but it leaves little time for the mother to make a decision if she didn’t know [she was pregnant] before [heartbeat detection],” said Lydia Cooke, 12, please note that this quote was given before the mark moved from transvaginal to abdominal ultrasounds.

Kasich indicated that he will veto the House bill before the amendments; he even vetoed a similar bill in December 2016. However, the bill passed 60-35 in the House. With two-thirds of the House and Senate, Congress could override the veto, but it would require Congress members to return during the holidays.

And yet, Kasich does have a history of upholding some abortion restrictions, such as penalizing doctors for performing abortions on Down Syndrome fetuses, abortions after 20 weeks of pregnancy, etc. Since the restriction on the bill moved to allow abdominal ultrasounds, Kasich may be more willing to pass the bill now.

In regards to abortion itself, one common term found in conjunction with abortion is that it is a “difficult decision.” Yet, the Guttmacher Institute, a research organization founded in 1968 focused on reproductive health, found that 87 percent of abortions sought “had high confidence in their decision before receiving counseling.”

According to Bustle, a women’s online magazine, the journal Contraception researched 500 Utah women pursuing abortions and found that 89 percent were confident in their decision to have an abortion.

Women’s minds about abortion are not easily influenced. Mandated counseling sessions, such as the one Ohio currently mandates, probably is largely successful, given the above statistics.

Treating women as if they have not thought about the consequence of this decision is foolhardy and insulting, women have come to their conclusion of what is right for them.

“We acknowledge our awareness of the sensitive and emotional nature of the abortion controversy; of the vigorous opposing views, even among physicians…The right of personal privacy includes the abortion decision…” wrote Justice Harry A. Blackmun in the majority opinion of Roe v. Wade, according to the Chicago Tribune.

“We acknowledge our awareness of the sensitive and emotional nature of the abortion controversy; of the vigorous opposing views, even among physicians…The right of personal privacy includes the abortion decision…””

— wrote Justice Harry A. Blackmun in the majority opinion of Roe v. Wade, according to the Chicago Tribune.

Women should have the privacy to have this choice, instead, the question of if women are afforded this right is constantly up for public discussion.

“There are hundreds of reasons why an abortion is necessary, the majority being life-threatening. When it comes to teenage pregnancies, sure, they should’ve been more careful. But why are we forcing them to bring a child into this world only to potentially deprive their child of a stable home? This shouldn’t even be an issue honestly,” said Akhila Durisala, 11.

Pro-life and pro-choice advocates will be watching the next few weeks play out to see if the Senate votes, Kasich signs/vetoes, and if the possible veto is overridden.