Concerts from your couch

My first experience with a virtual concert 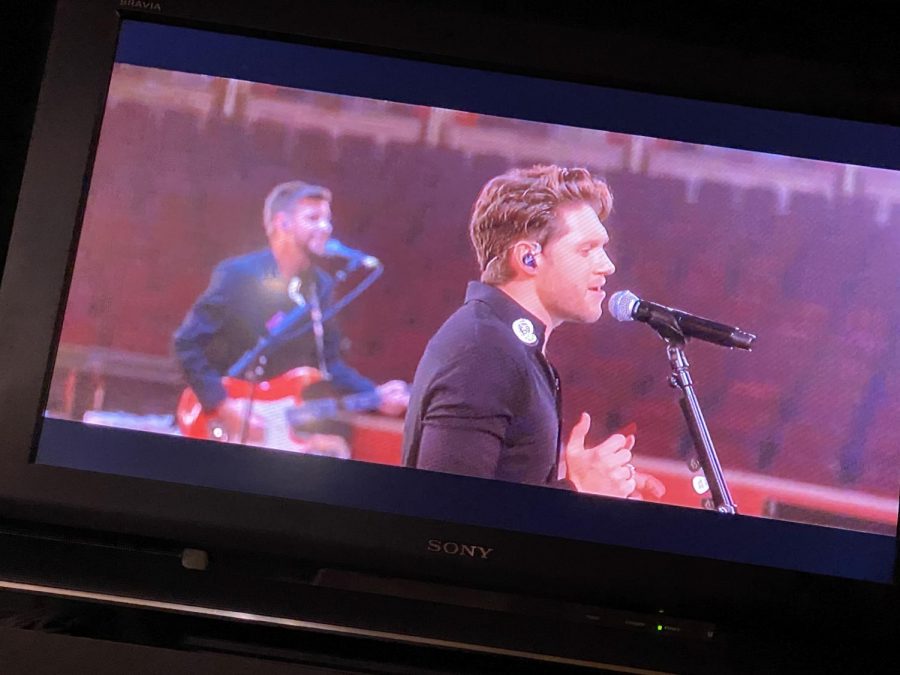 LIVE FROM YOUR LIVING ROOM. During the COVID-19 pandemic, live events have come to a halt, putting concerts, Broadway shows, and other productions on hold. Luckily, many artists and performers have found ways to hold performances virtually, such as former One Direction member Niall Horan, who held a live-streamed concert on Nov. 7 from Royal Albert Hall in London. Despite my skepticism of the idea of paying to watch a performance from my living room, I tuned into the live stream anyways, and I was blown away by how much I enjoyed it. From the stunning venue to Horan’s fantastic vocals, it was definitely a concert I will remember.

The first big-name concert I attended was for Taylor Swift’s tour of her “1989” album. As a sixth-grader at the time, every detail of the live music experience stood out to me: the energy radiating from the crowd, Swift’s stunning costumes and vocals, the light-up bracelets given to every audience member that changed colors in perfect harmony with the songs, and my sister and I singing along to almost every song. It was awesome.

Flash forward five years, and here we are in the middle of a pandemic, craving a live music experience that does not seem to exist. However, lucky for us, some artists, such as Niall Horan, got pretty creative when the pandemic took hold of our lives, allowing virtual concerts to make an entrance into the live music scene.

In all honesty, I was a little skeptical about the idea of a virtual concert for a while, especially the ones you had to pay to watch. Why should I be paying to listen to the same songs I can just look up on YouTube? Why should I waste my money on watching a performance from my living room without the energy of thousands of other fans watching with me?

Despite the skepticism of a virtual event, I still had the desire to find out what one would be like. So when my friend asked if I would watch Horan’s live-streamed concert with her, I said yes. But to be completely honest, I had listened to a very limited number of his songs at this point. I knew “This Town” and “Nice To Meet Ya” from the radio, but I had no clue who was singing these songs until my friend told me. Yet, I still found myself Saturday night in my living room, waiting for the live stream to start.

And let me tell you, the $16 ticket price was totally worth it.

The concert opened with Horan singing one of his slower songs, “Dear Patience”, in a darkened concert venue. When he started his second song, the lights came on revealing a grand Royal Albert Hall and his full band on stage, with no audience. Right from the beginning, Horan’s vocals were on point, with the subtle differences in the way he sang certain songs verifying the fact that he was definitely not lip-syncing. His band also did a phenomenal job, each instrument adding another layer to his performance.

Outside of the vocal and instrumental components, the venue and lighting made the experience even more enjoyable. Throughout the performance, the lights changed colors or moved in a synchronized fashion with the beat of the song. From these added details, I felt more immersed in the concert experience, and to some extent, felt as though I was at a live music event.

Horan’s willingness to work the same energy he would exhibit during a live gig into a virtual performance made the concert all the more amazing. That feeling of an almost tangible excitement I feel during a live event came back to me in my living room as I watched Horan putting his heart and soul into his music on stage.

Fellow singer and song-writer, Ashe, even joined Horan on stage for their song “Moral of the Story”, which, in my opinion, was one of the best songs of the night. Their live performance was better than the track, making for a great addition to the event.

Of course, singing and dancing around in my living room to some of the songs that I actually knew the lyrics to made the evening very enjoyable. From “Black and White” to “Nice to Meet Ya,” nothing beats a good living room sing along.

With an end to the pandemic nowhere in sight, if you are presented with the opportunity to watch a virtual concert, I encourage you to attend. While being in your living room with the sound of your dryer buzzing in the background and your family members searching for a snack in the kitchen is not the same as being at the live event surrounded by thousands of fans, it works for the time being. After all, is there a better place than your own home to sing and dance along to your favorite songs like no one is watching?