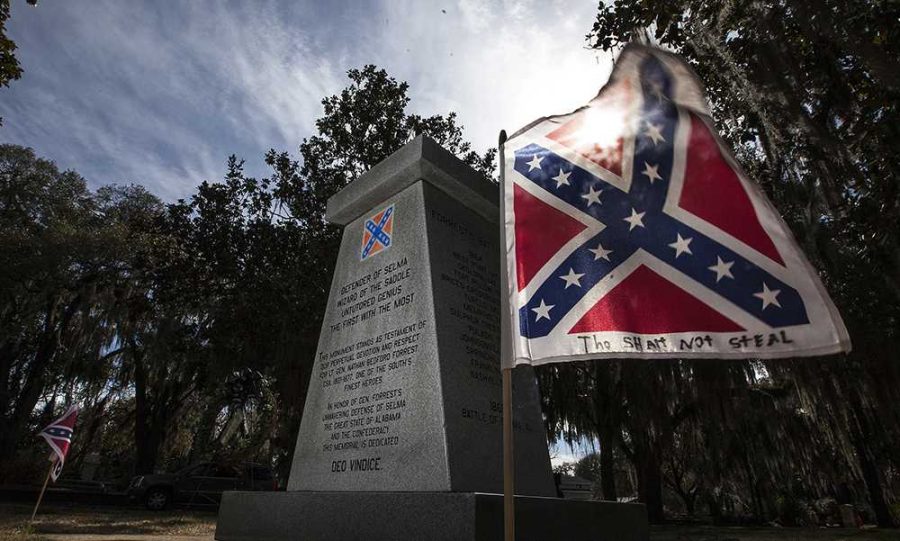 A monument honoring Confederate Gen. Nathan Bedford Forrest stands with the Confederate Flag. Monuments like these are still prevalent in the United States. Now, faced with much opposition states have been taking down Confederate memorabilia from state property.

As the Confederate flag was slowly lowered to the ground in South Carolina last year, the cheers and jubilation marked a turning point in our country’s history. The end of the flag’s 50-year reign was precipitated by the mass shooting in Charleston earlier that month. However, there is still a continuing epidemic of schools and buildings named after confederate leaders.

Last year, a petition circulated calling for the removal of Calhoun’s name given to a residential college at Yale University. John C. Calhoun was a statesman, political theorist, and the 7th vice president of the United States. However, he is best known for his defense of slavery.

There are monuments still commemorated to many Confederate leaders and politicians such as Robert E. Lee and Nathan Bedford Forrest (founder of the KKK). While it is obviously very wrong to have the Confederate flag and people like Forrest commemorated in our country, many claim the flag is a part of their heritage.

Most professional historians agree that the war was fought over slavery, though there still exists opinions among the public that attribute the cause of the war to issues like tariffs, states rights etc.

We as Americans, may not concur on the reasons for the civil war. However, we can all agree that the Confederate flag is an emblem for the pain, suffering, and oppression African-Americans experienced in our country.

Without a doubt, imagery like this can not be displayed and commemorated in a multi-racial society such as the United States. Keeping it alienates minorities and “celebrates” a culture of white supremacy and racism. Removing these symbols is only the first step- it does not necessarily fix the systemic racism still interwoven in our society today.

Historically oppressive imagery also pertains to Native Americans as well (note: Washington Redskins). In our modern day and age, we are able to look back and critique history and think for ourselves.

Even though the civil war and the oppression of the Native Americans are a part of our history that should be acknowledged, we should learn from past mistakes and move forward.

Instead of clinging on to weak claims of “heritage” and “pride,” the United States should acknowledge real activists and leaders who broke down barriers of race. Actions such as placing Harriet Tubman on the $20 bill are baby steps in the right direction.

The New York Times wrote, “This is not about rewriting history. It’s about shaping the culture going forward.”