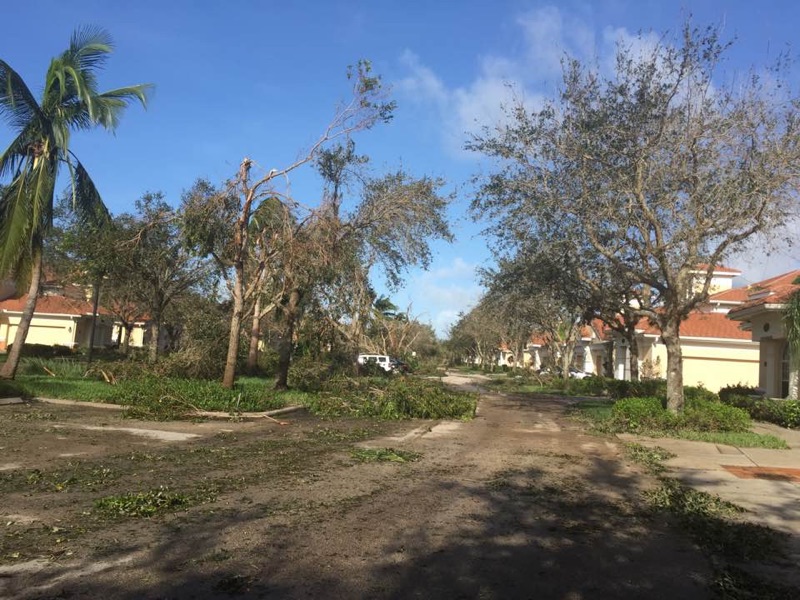 DESTROYED. Palm trees are not as strong as regular trees. They are tall and skinny, so when things like this happen palm leaves end up everywhere. You can also see that many regular trees have fallen branches and little leaves left. There are branches covering the roads and it is making it difficult for people to get home.

Irma destroyed almost everything in its path. Almost five million people across Florida were left without power, and as the storm got smaller, it left the other places it passed without power and with heavy winds.

Two places in Florida that were heavily impacted with floods, loss of power, and loss of businesses and homes were Naples and Marco Island. Marco Island is right off the coast of Naples; it is as easy as taking a bridge to get there.

Marco Island and Naples are almost at sea level, and people living there were very worried about the storm surge and how it will affect their homes.

Although Loon got lucky, many people only a few miles away from her experienced much more damage. In Marco Island, there are many small businesses that were not as lucky. Most people living in the places like Marco Island that got badly hit do not know when they can finally go back home.

The biggest worry for us, however, was the storm surge because our condo is only about four feet above sea level.”

“What usually happens in this kind of storm is that electricity is out for an undetermined amount of time. This means that people will be unable to return to their homes even if they were not badly damaged. This increases the risks of things like mold which can be expensive to treat,” Loon said.

Hurricanes are not unusual, especially in Florida. The homes in Florida are not able to keep out water. However, many houses there are built to be able to withstand the wind from hurricanes.

“Since Hurricane Andrew in 1992 the state of Florida brought in new codes for construction to make sure that the materials used could withstand hurricane force winds, therefore we were not too worried about the condo withstanding strong winds,” Loon said.

Hurricane Irma was one of the most powerful storms to hit Florida in years. It was a Category 5 hurricane with winds above 130 MPH. The storm affected the majority of the state, but was especially bad in southwest Florida.

Martin Loon has a condo in Naples, Florida, where Hurricane Irma has taken over.

When asked what he is going to do to protect his house from future storms, Loon said “I definitely am going to consider purchasing hurricane shutters to protect our condo!”

Not only was Loon worried about the animals and people in the storm’s path, but also about his possessions in his Florida home.

“I would be devastated if all our South African art work was ruined because it has sentimental value.

“With 175 mph wind speed, all the brand new landscape throughout the complex we live in is completely destroyed. The pool deck of our complex is halfway under water. I pray that our home is in good condition,” Loon said.