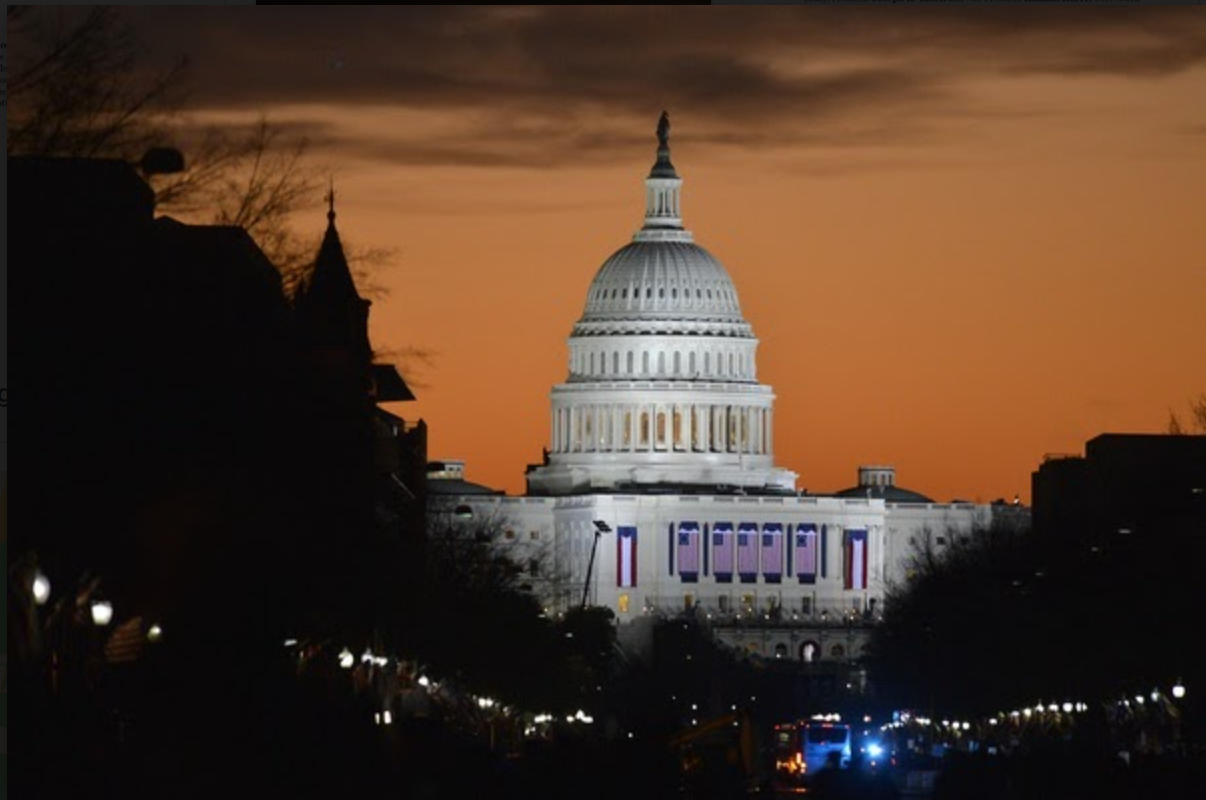 OFFICIALLY IN OFFICE. Today, President Joseph R. Biden and Vice President Kamala Harris were sworn into office at the 59th Presidential Inauguration. From limited attendance due to the COVID-19 pandemic to the first woman and woman of color to hold the office of the vice president, today’s inauguration will be remembered in more ways than one. To read more about some of the unique aspects of the day, keep reading! (Creative Commons)

OFFICIALLY IN OFFICE. Today, President Joseph R. Biden and Vice President Kamala Harris were sworn into office at the 59th Presidential Inauguration. From limited attendance due to the COVID-19 pandemic to the first woman and woman of color to hold the office of the vice president, today’s inauguration will be remembered in more ways than one. To read more about some of the unique aspects of the day, keep reading!

Distinguishing the 59th Presidential Inauguration from years past

Today, President Joseph R. Biden and Vice President Kamala Harris were sworn into office at an inauguration ceremony that will go down in history in more ways than one.

Of course, an obvious difference between today’s ceremony and those of the last few presidents was the crowd—specifically, the lack of one. Instead of an enormous swath of people, The National Mall held close to 200,000 flags representing those unable to attend the inauguration due to the COVID-19 pandemic. Increased security in response to the Capitol violence on Jan. 6 also curtailed the typically large crowd.

In terms of limited attendance, the 59th Presidential Inauguration also marked the first time in 152 years that a departing president did not attend their successor’s inauguration.  Former President Donald Trump left the White House shortly after 8 a.m. and was already in Florida at his private club in Palm Beach when Biden was sworn in.

The ceremony also made history with Amanda Gorman, the youngest inaugural poet ever, reciting her poem entitled “The Hill We Climb.” While referencing some of the struggles the nation has endured recently, such as the violence at the Capitol, Gorman successfully captured something we are all in desperate need of: hope.

“What I really aspire to do in the poem is to be able to use my words to envision a way in which our country can still come together and can still heal,” Gorman said, to the New York Times.

However, perhaps one of the most notable elements of today’s inauguration was Vice President Harris becoming the first woman and the first woman of color to hold the office of the vice president. Many were excited and supportive of this barrier-breaking milestone, including Hillary Clinton, the only woman to receive a major party’s presidential nomination.

“It delights me to think that what feels historical and amazing to us today—a woman sworn in to the vice presidency—will seem normal, obvious, “of course” to Kamala’s grand nieces as they grow up. And they will be right,” Clinton said in a tweet on Wednesday.

The ceremonies concluded with yet another altered tradition: a shortened presidential parade with a virtual “Parade Across America.” The hour-long event included several performing groups, making for a total of 1,391 participants, 95 horses, and nine dogs in the parade.

After the inauguration festivities, President Biden began his presidency by signing 17 executive orders, memorandums, and proclamations. In comparison, Trump signed one executive order during his first day in office. Among Biden’s orders were to rejoin the Paris Climate Accord and a national mask mandate that will require masks and physical distancing in all federal buildings, on all federal lands, and by all federal employees.

With an eventful inauguration day coming to a close, many Americans wonder what challenges lie on the road ahead. However, as President Biden said in his inaugural address, “To overcome these challenges—to restore the soul and to secure the future of America—requires more than words. It requires that most elusive of things in a democracy: Unity. Unity.”

WHAT’S NEXT? Only a few days after the riots on Capitol Hill on January 6, 2021, the United States Congress is growing increasingly more concerned about what their future will look like, with many different untravelled roads ahead. The question of whether to blame President Donald Trump for inciting the attacks and leading the country down the long road of a possible impeachment or removal looms ahead as the country holds its breath for Inauguration day on January 20, 2021. Whether to reprimand or punish the president or let him be. Whether to pursue another impeachment or just give him a slap on the wrist. All questions our Congress will soon face as the motions for different governmental actions begin and the clock ticks closer to the beginning of a new administration in a few short days. Read the full story at the link in our bio.

It has been six days since the storming of the Capitol rocked the nation on January 6, 2021.

And it’s been a rough couple of days, to say the least.

Only a few days after the riots, the entire nation and its government are still trying to recover from an attack that only seems to grow more disturbing as more information is uncovered every day. Reports of Molotov cocktails and pipe bombs, of murky hostage-taking plots and zip-tie carrying assailants, are plastered across major news outlets and social media platforms, terrifying our own citizenry and the world abroad.

The consequences of years of pent-up and neglected political extreme idealisms have blown up in our faces, right at the beginning of a new year supposedly marking a change for the better. With days left before the presidential inauguration and a major shift in power, the world is on edge, watching with bated breath for any more potential fallout before January 20, the inauguration of President-Elect Joe Biden.

The future of our democracy, of the sheer democratic ideal worldwide, was put at risk when those mobs first broke into the Capitol buildings and has remained up in the air for the moment. Leadership is splintering, with our president persecuting his own vice president, a divided Congress split between action and inaction, and with a gathering military force patrolling outside the hallowed halls of our republic, tensions are certainly running high.

How did this happen? A question that seems to be on everyone’s mind and that also seems to be directed straight at one person: the leader of said nation, our President, Mr. Donald J. Trump.

For the moment, I will elect to put aside the question of who is to blame, but the large consensus is currently that, yes, our president is in at least some way responsible for inciting the attack on his Capitol and for not responding appropriately during the said crisis. Many are demanding his resignation or impeachment after this attack exposed the volatile underbelly of the far-right movement Trump himself enjoys feeding, and debates online and in session during Congress have left the country torn and conflicted on if and how the president will be punished for his actions.

The initial fallout was quite sensational, with social media platforms deleting or shuttering his accounts quickly after initial concerning response Tweets by the commander-in-chief, company executives claiming that any further comments risked inciting more violence and conflict.

The scathing commentary on nightly news channels and various statements by different politicians and leaders all reported varying and disputed claims on the next steps after the riot, leading all of us to ask one thing: What’s next for our president?

At the moment, the future remains up in the air, as even today on January 12, 2021, Congress is in the midst of debating possible paths forward. For now, let’s begin with the three main potential governmental reactions:

One of the first scenarios posed by experts and commentators early on during the coverage of the riots, Section 4 of the 25th Amendment basically says that when the vice president (VP) and a majority of the members of the Cabinet deem the president “unable to discharge the powers and duties of his office”, they can then submit a letter to Congress for deliberation. Congress would then have to pass a ⅔ majority to allow the vice president to take over the presidency until the president is able to continue the job.

Even with the growing rift between the president and vice president, VP Mike Pence seems reluctant to enact the 25th, and it is doubtful that he alone will proceed with using it. Speaker of the House Nancy Pelosi and Senate Minority Leader Chuck Schumer have made personal requests to the VP to implement the amendment (which have gone unanswered), and the House of Representatives is currently voting on legislation that could push VP Pence and his Cabinet to use the 25th amendment, an unheard-of move on behalf of Congressional leadership, but one with potentially ground-shaking results.

To be clear, the president has been impeached before, he simply hasn’t been removed, due to the lack of votes from the majority-Republican Senate. On this second occasion, the Democratic-held House is once again introducing articles of impeachment, charging the president with “inciting violence against the government of the United States”. The articles will be debated and voted on in the House as early as January 13, 2021, where they will need a simple majority to pass to the Senate and a ⅔ majority in the Senate for removal.

However, several obstacles stand in the way of a potential second impeachment: first, the fact that the Senate is currently in recess and will not resume their session until January 19, one day before the inauguration of President-elect Joe Biden. While Congress can still impeach an ex-president, critics wonder if such a display during a new administration would start the presidency off on the wrong foot, and many Republicans have expressed their displeasure with any potential impeachment proceedings continuing during the Biden administration.

Secondly, that ⅔ majority is a bit tricky. While Nancy Pelosi and her Democratic colleagues are pushing for impeachment, the Republican side of the aisle is looking quite unsure, and the bar for impeachment in the Senate is a ⅔  majority, meaning an additional 17 Republicans siding with the Democrats. Some more moderate Republicans, like Senator Pat Toomey, have publicly issued statements calling out President Trump on his actions, but still, the bipartisan effort is strained and unpredictable, making it difficult to ensure that the proceedings actually end in removal.

The general consensus among those who wish to impeach is that while also a punitive measure, impeaching President Trump could also prevent him from running for the office of president again in 2024, avoiding a potential restart of the cycle of bipartisan conflict. If the Senate reaches a ⅔ majority and convicts the president, only a simple majority is required to ban him from federal office for the rest of his lifetime.

One of the most agreed-upon measures across party lines amongst all the bipartisan conflict, however, is censuring. A censure is basically a governmental slap on the wrist. It doesn’t formally do anything, it just expresses Congress’s disapproval for the individual or their actions, and it wouldn’t prevent the President from running again in 2024 or leave any real consequences. A motion to censure is voted on individually in the Senate and House and only needs a simple majority in either one.

The Presidential Inauguration: A Rundown 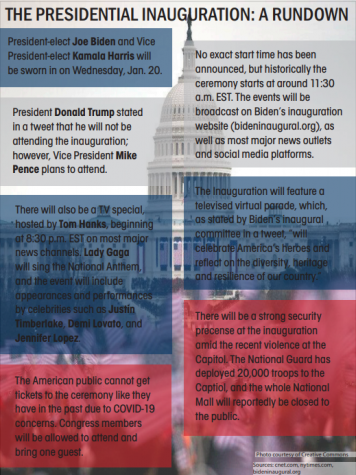