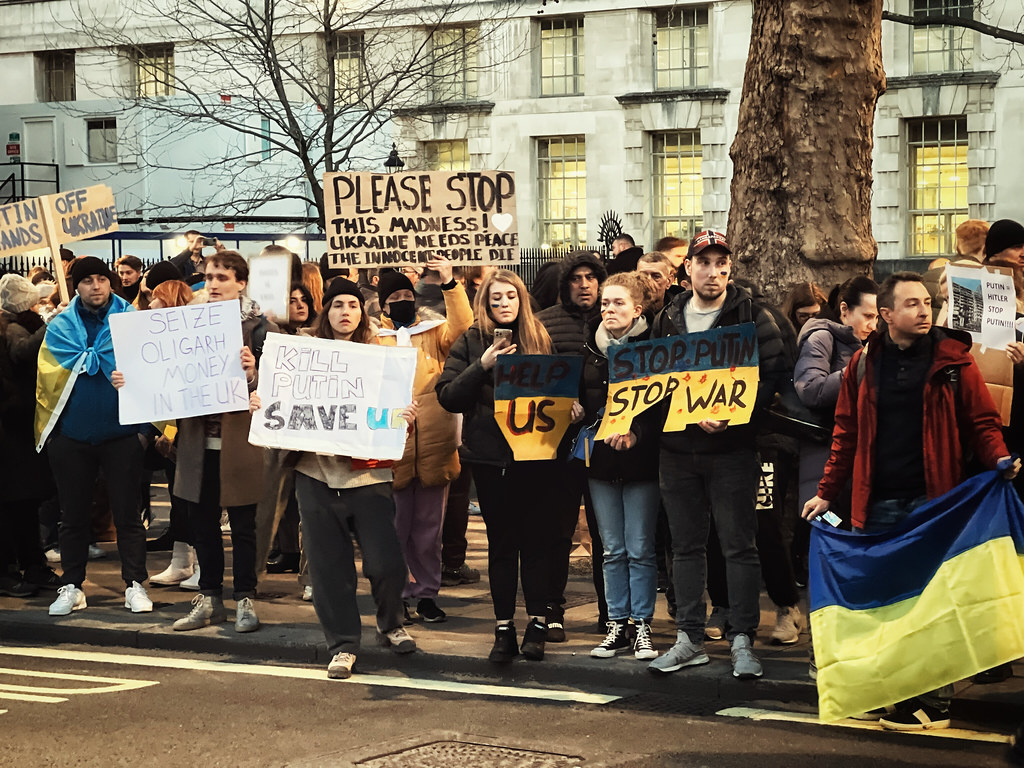 RUSSO-UKRAINIAN WAR. In the days after the outbreak of the Russo-Ukrainian War, people around the world are quickly responding, protesting the invasion and demanding the end to Russian advances. Protests occurred outside major capitals like London, Berlin, and even St. Petersburg as citizens urge their leaders to respond to the attack and to stop the war in Ukraine altogether. (Garry Knight)

RUSSO-UKRAINIAN WAR. In the days after the outbreak of the Russo-Ukrainian War, people around the world are quickly responding, protesting the invasion and demanding the end to Russian advances. Protests occurred outside major capitals like London, Berlin, and even St. Petersburg as citizens urge their leaders to respond to the attack and to stop the war in Ukraine altogether.

So, Russia Has Invaded Ukraine

What you need to know

After weeks of tense diplomatic confrontation, military preparation, and overall pervasive anxiety over potential conflict, Russia has finally made its move and begun its invasion of Ukraine.

At dawn on February 24, 2022, Russian President Vladimir Putin announced to his citizens that their country’s forces would soon be crossing Ukrainian borders to engage in a “special military operation”. This “operation”, as the world would soon find out, amounted to Russian forces surrounding the country on three sides, with troops entering Ukraine from Belarus in the North, Russia in the East, and Russian-occupied Crimea in the South.

Russian military forces have been amassing at Ukraine’s borders for some time now, as according to the BBC, the Ukrainian government reported the presence of as many as 200,000 troops over the past few months, causing uneasy stirring among the European community and the quick organization of NATO leaders as they prepared for a conflict that could send shock waves throughout the globe.

Keep reading to learn more about the context behind the invasion, its current status, and what it could mean for the future.

So, why has Russia declared war on Ukraine?

The reasons for the invasion are many-fold and incredibly complex, and depending upon whom is asked, the answer will differ. To offer some basic context, Ukraine and Russia have had a contentious history for an incredibly long time, as while they historically share a similar cultural and regional identity, the fall of the Soviet Union in 1991 put strain on the situation. Russia has had strenuous relations with most, if not all of its former Soviet satellite states, and did not take well to the division of its previous empire, nor the growing Western threat that fueled it. In 2014, after a Ukrainian uprising led to the toppling of a pro-Russia regime and the establishment of a pro-democracy, EU-friendly government, Russia invaded the Crimean peninsula, sparking Russian-backed separatist groups in the far-Eastern regions of Donetsk and Luhansk to clash with Ukrainian forces in an attempt for independence. While the Minsk Accords were signed in 2015 to declare a cease-fire between Ukraine and the insurgents, fighting has continued up until today, with, according to Vox, a recorded 14,000 resulting deaths and 2 million displaced, and has become a part of the cause for the current invasion.

Ukrainian relations with the West have always been a contentious point for Russia, and discussions between NATO, the EU, and Ukraine have set the Kremlin on edge in recent years, with concerns that the large country that has provided a buffer between Russia and the NATO bloc for so long could suddenly become a part of a major Western alliance, severely antagonizing Russia. If Ukraine joined forces with NATO or the EU, it would provide a huge entry point to Russian territory, something incredibly advantageous for opposing nations or enemies. Earlier last week Russia presented a list of their demands to the US and NATO, most of which, as reported by Vox, were definite nonstarters, including “that NATO stops its eastward expansion and deny membership to Ukraine, and that NATO roll back troop deployment in countries that had joined after 1997, which would turn back the clock decades on Europe’s security and geopolitical alignment.”

In a broadcast earlier in the week, President Putin addressed his nation and prepared them for the imminent invasion of Ukraine. In his speech, Putin attacked the Ukrainian establishment, accusing authorities of being Nazis, decrying their separation from the Russian cultural identity, and claiming that “The policy to root out the Russian language and culture and promote assimilation carries on. The Verkhovna Rada has generated a steady flow of discriminatory bills, and the law on the so-called Indigenous people has already come into force,” further supporting the Russian claims that there has been an ongoing genocide against Russian-speaking Ukrainians, none of which have been confirmed by the international community.

On the morning of the “special operation”, Putin formally recognized the independence of the states of Donetsk and Luhansk in Eastern Ukraine, the same separatist groups that have been supported by Russia since 2014, all part of his approach to “demilitarize” Ukraine and support the Russian population of the region.

The Current State of Affairs

Invasion by air, land, sea and even internet has progressed at an alarmingly rapid rate, and the Russian army has deployed a wide array of military vehicles, aircraft, missiles, as well as troops, in order to destroy its intended targets. Ukrainian cities from the borderlands all the way to major population centers like Kharkiv and Kyiv are being shelled as Russian troops efficiently press further into the country, and the BBC reports that Russian forces claimed to have destroyed as many as 70 military targets already. The President of Ukraine, Volodymyr Zelensky, declared martial law in an announcement to his citizens on the first day of the invasion, warning people to remain indoors, and reassuring them that the United States and European allies would soon arrive to help.

But as the West debates its approach to the invasion, many Ukrainian civilians have stepped up to join their nation’s army in repelling the Russian invaders, successfully countering and slowing the capture of major Ukrainian cities. These courageous men and women have managed to fend off attacks from one of the world’s largest military powers, and have succeeded in destroying President Putin’s expectations of a simple conquest. Yet, despite the strength of the Ukrainian army and civilians, the might of Russia’s military force is an incredible foe, and ⅓ of Russia’s troops still remain at the border, waiting for commands. One critical factor to note as the Russian forces advance, however, is also the availability of resources, as one of the major forces holding back their invasion is their limited supply and access to diesel and other necessities, something that has already begun to slow down the invasion and severely restrict their ability to steamroll into the country.

At the moment casualty rates of citizens and armed forces remain up in the air as both sides conflict drastically in their reports, but the Associated Press reports that “Ravina Shamdasani, a spokeswoman for the U.N. High Commissioner for Human Rights, says its staffers have so far verified at least 127 civilian casualties — 25 killed and 102 injured — mostly from shelling and airstrikes,” despite Russia’s previous assurances that they would not target civilian populations. After unexpectedly fierce resistance from Ukrainian forces and technical issues, Russia’s tactics have seemingly changed to bombing major civilian centers to lower morale, a tactic used to win victories in Crimea. The Ukrainian government has reported the deaths of dozens of children, as well as injuries, and the number of casualties only increases with further shelling and violence. Many Ukrainian civilians have opted to take shelter in the fortified subways tunnels under major cities, remnants of the Cold War era, and doctors in hospital bomb shelters have even had to deliver multiple babies to expectant mothers while underground.

As the conflict progresses, thousands of Ukrainians have begun fleeing to neighboring countries, including Poland, Moldova, and Slovakia, with roads clogging with cars, desperate to leave before fighting can worsen. While President Zelensky has banned the departure of any Ukrainian men of military age, women, children, and the elderly are filling train and bus stations, heading West.

The Associated Press reported that “A spokeswoman for the U.N. refugee agency, Shabia Mantoo, said more than 100,000 people were believed to have left their homes in Ukraine and that “up to 4 million people may flee to other countries if the situation escalates.” Many sympathetic Eastern European leaders have opened their borders, with officials granting protection status to Ukrainian refugees and the European Union announcing its commitment to ensuring the safety of all those fleeing.

The invasion of Ukraine has been an incredibly monumental moment for European and international history, and the repercussions are certainly going to have lasting effects on current world affairs. As the largest war declared in Europe since the close of World War Two, most world leaders are balancing decisive action with a vehement desire to prevent the outbreak of another multinational war in the continent.

Most countries around the world have chosen to side with Ukraine in the conflict, decrying Russian actions and supporting NATO and the EU in casting economic sanctions on Russian commerce. There are only a few outliers, including Belarus and a couple of other former USSR states, however, even formerly pro-Russia European allies, like Hungary, have chosen to strongly condemn the Russian invasion.

The international community has chosen to respond to the attacks primarily by using sanctions to restrict trade, as well as booting Russian banks from the Society for Worldwide Interbank Financial Telecommunication (SWIFT) economic network. Dozens of large corporations, including oil and natural gas companies, have also chosen to break ties with Russia over the invasion, and large projects like Germany’s Nord Stream 2 gas pipeline have been suspended. Aid has also been granted to Ukraine in massive amounts from all sides, with the Associated Press reporting that among other large providers, “the European Union has decided on an “unprecedented” 1.5 billion euros ($1.68 billion) in economic aid for Ukraine.”

In consideration of the massive gap between the military strength of Russia and Ukraine, Western allies have been careful in their deployments, as most countries, especially the US have vehemently opposed actually participating in warfare. Many nations, like Germany, have instead offered armaments to the Ukrainian army to support their efforts without actually inserting themselves into the conflict. However multiple European troops are on standby, with NPR also reporting that President Biden authorized “additional movements of U.S. troops already stationed in Europe to “strengthen” NATO members Estonia, Latvia and Lithuania, the three Baltic nations that border Russia.” Further involvement of foreign troops on either side of the conflict has yet to be seen, but could significantly change the course of this tense situation.