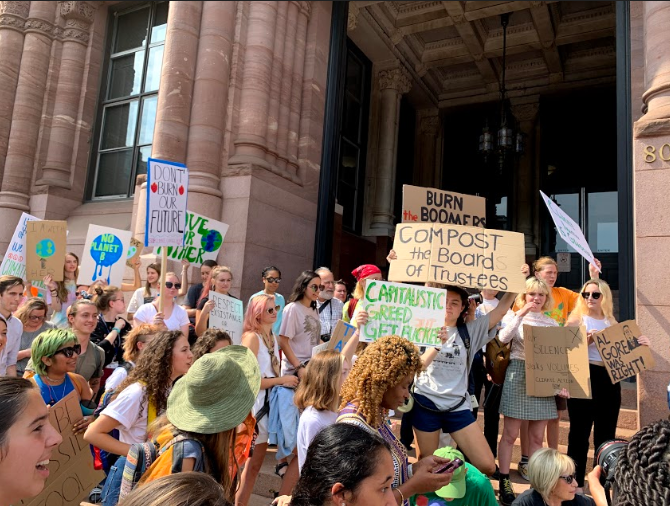 CLIMATE STRIKE. On Nov. 20, there was a Climate Strike held at Cincinnati City Hall.

Endless lines, the constant ringing of cash registers, arms full of bags, and a swarm of shoppers hustling to find the best deals. Sound familiar? Traditionally the biggest shopping day of the year, Black Friday kicks off the holiday season with a consumerist explosion. But in 2019, it may just be receiving a long-awaited environmental shakeup. Just a few weeks ago, Collins Dictionary named “climate strike” 2019’s word of the year. Following the mobilization of over four million people around the world for Sep. 20 Global Climate Strike, the decision is no shock. So, it is not that surprising that Black Friday is receiving its dose of environmentalism this year.

This year, Nov. 29 will host not one but two events: Black Friday and a Climate Strike. And no, it is not a coincidence. Following a successful Global Climate Strike just a few months earlier, organizers are turning attention to events like Black Friday that attract shoppers to scoop up as much as possible, even if they do not need it. “We need to draw attention to the impact of consumerism on our environment and Black Friday is the perfect time to do so” explain Aleeza Yakoob, an organizer with Zero Hour Ohio. The timing of the strike has its intentions set on reminding consumers of their environmental impact as they shop.

So what exactly is the connection between Black Friday and Climate Strikes? Well, the number of purchases made on Black Friday and on related holidays like Cyber Monday creates a large demand for production and shipping.

“Consumerism is when the demand for goods increases and as a result so does the production of goods,” said Yakoob. Further, the impact is not just coming from loads of people going sale searching on Black Friday, but ordering millions of items on Cyber Monday as well.

According to estimates from the U.S. Postal Service, they will deliver 15 billion pieces of mail and 900 million packages between Thanksgiving and the New Year. The environmental impact of all of the shipping and production is huge and especially contributes to rising carbon emissions.

Now, the point of the strike is not to shame Black Friday shopper or villainize people for wanting to buy things, but instead to draw attention to the impact they have.

“It’s just that we as consumers need to be more mindful of our shopping habits and focusing on exactly what we need and the quality of the stuff we’re buying,” said Felicia Xiao, another Zero Hour Ohio organizer.

So while you are out shopping this holiday season, try keeping that word of the year in the back of your mind.