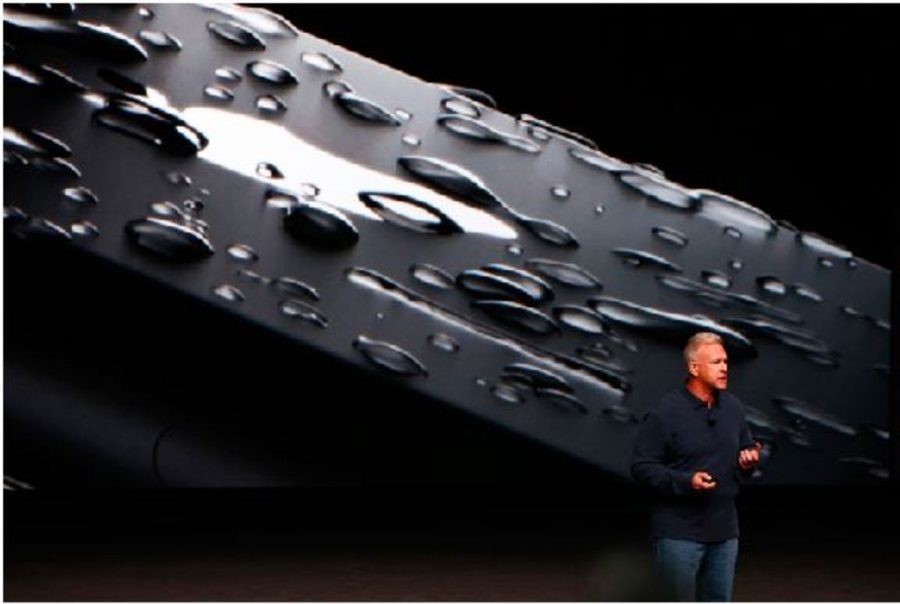 At the exclusive Keynote event, one of the main selling points was the water resistance. Pictured are drops of water on the phone, showing that it does not matter if a phone gets wet. Water resistance on the iPhone 7 is effective up to three feet deep.

It is that time of year when your favorite technology company, Apple, releases a new product. To satisfy consumers, however, Apple has decided to release not one, but two major products.

The brand new iPhone 7 and the Apple Watch Series 2 will hit the shelves in one week.

Just yesterday, Apple held an event that was exclusive only to those who were invited. The general public was able to view a livestream of the event through Apple’s website.

During the presentation, Apple revealed their two new products, and the new technologies that come with it, to the world.

Apple CEO Tim Cook calls the iPhone 7 the “best iPhone we’ve ever made.”

According to the data from the presentation on apple.com, consumers have no choice but to agree.

Water and dust resistance, a new touch sensitive home button, upgraded speakers, removal of a headphone jack, and a new camera are just some of the features on the new iPhone.

“The feature that I like the most is the water resistance. I’ve had to get a new phone due to water damage many times before. Now, this won’t happen,” said Jack Loon, 12.

The other product Apple released was the Apple Watch Series 2. This is like a mini phone that goes on your wrist. The only thing it really cannot do is make calls and surf the web.

New features on this version include a build in GPS, water resistance up to 50 meters, a dual-core processor, and a brighter display than in previous models.

“I don’t really see the point in the Apple watch. It’s nice to have but it’s not something you need like a phone or a computer, which can do all of the things that the watch can do plus more,” said Sydney Klein, 12.