Women march across the globe 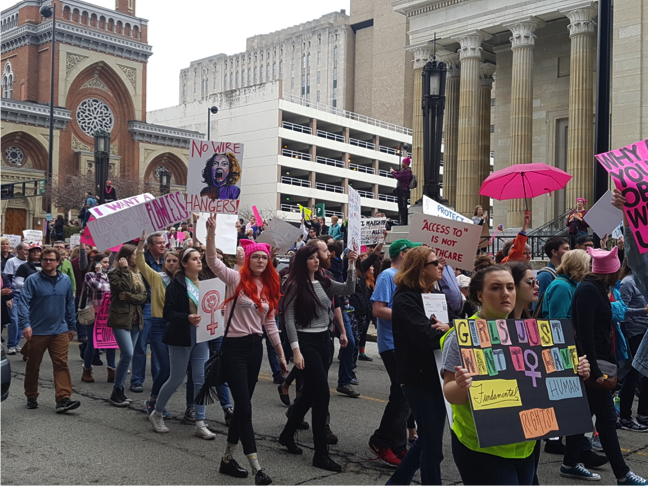 Protesters march in Washington Park on Sat., Jan. 21. The march was meant to be an inclusive, peaceful protest to support women, the LGBTQ+ community, immigrants, people from different faiths, and many more. Women’s marches took place all over the world.

On Sat. Jan. 21 marches for women’s equality took place across the world. Even here in Cincinnati thousands of people, both male and female, from all walks of life took to the streets and gathered at Washington Park.

The march was kicked off by the event coordinator, Billie Mays at 11:55 a.m., and for the next hour speakers talked about their hopes and aspirations for women in the coming years. These speakers included Cincinnati Vice Mayor David Mann, poet Siri Armani, and Aftab Pureval, a recently elected member of the Hamilton County Clerk of Courts.

The speeches encouraged women to not only take a stand for their rights during the march but also every day after, as Pureval said, “Without action marches will fall flat. What we need is for you to get involved every day.”

As the speeches came to a close the entire group of marchers bowed their heads for a moment of silence at 1:00 p.m. The moment of silence took place at every march across the country and served as a reminder that the march was about much more than just one city- it was symbolic of the whole world coming together.

After the moment of silence people began marching down Central Avenue, and among these marchers were SHS staff members and students. Students such as Brooke Baker and Jacob Speigel crafted signs to hold up during the march with their friends.

“It was important I marched because despite my privilege I am aware of the discrimination women go through. If you are a woman and you feel unaffected by discrimination, that doesn’t mean it doesn’t exist, it means you’re privileged and you need to use your leverage to help other women,” Baker said.

You need to use your leverage to help other women.”

“I’m encouraged because I think for every person who was out there at least two to three more would’ve liked to come. It is a good sign that we won’t be silenced and that the truth will prevail,” Ferguson said.

By the first hour people were both ending and starting their march, with a myriad of others in between them. While people marched they chanted the march slogan,“Fired up and Ready to go”, as well as “this is what democracy looks like” and “love trumps hate”.

Overall, the march left an impact on all those who attended and those who heard about what took place through the news and social media. What everyone should take away from this however is, as Pureval said, “What impacts one of us impacts us all.”

In the United States, the Women’s March is considered one of the largest protest marches in its history.

Women are “Fired up and Ready to go!”