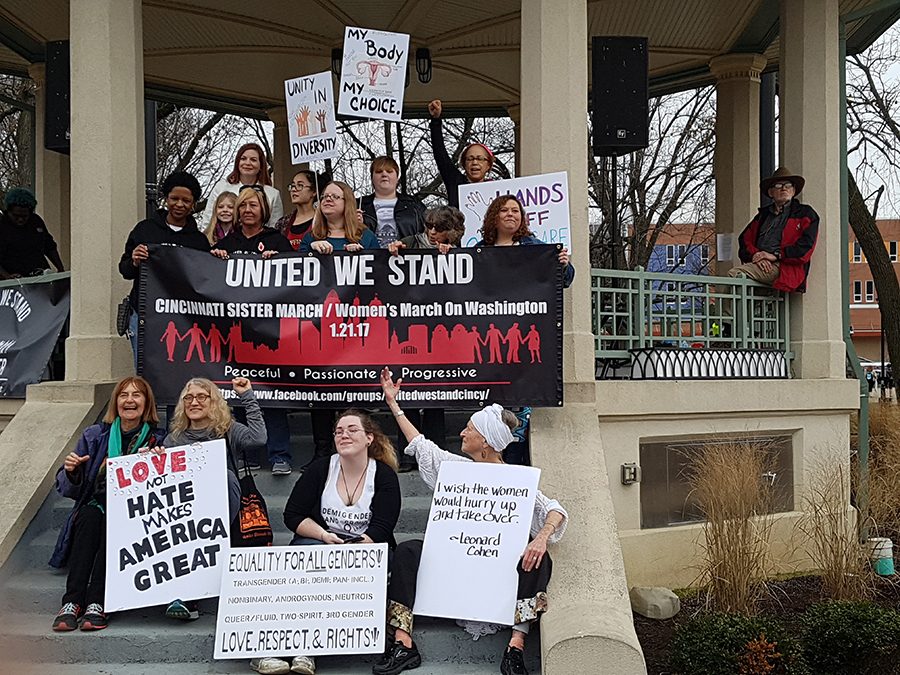 What role does technology play in organizing the march?

It played everything in the march. On the Thursday of new year’s weekend, Jessica posted that event, and I told her to let me know if she needed help. She actually said she was going to D.C., and needed someone to be here. I thought, how hard can it be? Well that’s the other thing we didn’t talk about, which is how expensive to put something like [the march] on. I started that Friday, and for four days I probably spent 16 to 18 hours every day that weekend reaching out to groups, sending out the event on Facebook, messaging people I could think of, and getting the word out there. That is what I think started what happened, because [the march] was huge. We thought we were just going to have a couple hundred people, and then by Monday  of New Year’s weekend we had like 1,000 people on the Facebook. So when I called the police back I said ‘You know I think we might have a large group’. He said we were probably going to have to get permits. We had to get permits, pay the police fees, and we had to get insurance. It was a lot of things to get. But it was great because we started a GoFundMe, which just raised more money than we could have ever imagined. It’s exciting stuff, like the Planned Parenthood event. We helped with the event in Mason, we did a rally at the airport. One weekend we did a rally every single day. It’s been really inspiring and hopeful when most of us don’t know what to feel in these situation. But I think people are willing to get out and maybe sometimes they just don’t know about it because they’re not connected, and we need to figure out how to get people connected who are not on social media.

With the march that you organized, were you connected with the big women’s march in Washington?

The other girl that organized with me, Jessica,  actually got started helping to organize the buses to Washington, and people were asking her ‘Why aren’t we doing a Cincinnati march?’ So that’s when she posted on that Thursday, and it all just started from there. The Ohio group that was doing the Columbus march the week before didn’t want other cities in Ohio to do a march because they wanted everyone to come to Columbus if they were not going to D.C.  I mentioned that no, not everyone is going to D.C. So I’m so glad it worked out. I was actually planning to go to D.C., but when I looked up hotels in D.C. to stay the weekend and they were all booked. And so it worked out perfectly.

What were the steps specifically that you had to take to make sure that the march happened?

Like I said when we first started I expected a few hundred people, because I’ve been to a couple other marches, like Black Lives Matter, and I’ve been to their marches in the past year, and we actually organized the protest that was at US Bank Arena when Trump came back for his tour. So I was expecting a couple hundred people when I first said I was going to do this. I had no idea- when I first called and told the officer that he was like ‘ Well you guys can show up, you can stand on the sidewalks, you can’t obstruct traffic or do anything like that. And then when the numbers started growing so huge I called him back, he said we need to get permits. What he told me is if I don’t get permits and we have thousands of people show up, we would be personally fined. So that was the kicker for that. We had to get a parade permit and an insurance policy for that. You have to pay for the police time, and for them to shut down the streets. You do have to pay Washington Park for the park permit, and all the service fees. I’m still waiting for the final bill from the police, because I know we went overtime, but I think that just putting that event on that quick would be minimum  3,000 dollars. That is how much the march cost, but now , what’s happening with the April 15 event they’re making us pay the maximum amount of permits because of all the people we had show up. But luckily, after the GoFundMe funds we had 10,800 dollars. In fact one time we stopped it and then we realized how expensive everything was and we started it again. And that all from regular people, no sponsor, no corporations, no nothing, that is just people donating small amounts of money, like 10, 20, 50 dollars. It’s just crazy. And I hope that they continue to do that . The other groups like the one that’s doing the scientist march and the one that’s doing climate change, they’re finding out how expensive that is. And for our tax march, there’s a Reds game that day so we’re going to Fountain Square, but there are some places where you can’t march, and so there are just so many things and so many obstacles for you or against you. And the fact that you have to pay that much money to protest is crazy. Now for the place that were going to for the event on March 8 doesn’t require any permit so that will be okay if we have a couple hundred people.

What should regular people do to continue the momentum of these march?

I think that there are so many ways to get involved that there is no reason you should not participate. If you don’t have the time or you don’t like to get out in public you can be calling and emailing and getting in contact with all our representatives. You can write letters or postcards too. There are so many things people can do daily. The Women’s march is a call to action. There are guidelines and suggestions of things to do mostly through social media right now. But they tell you exactly which representative and which congressman or person to contact for these issues. I think that there’s so many ways to get involved that hopefully people will start feeling like there’s something they can do. With the Betsy DeVos pick we rallied, we called, we emailed and it was kind of defeating, but you have to know that’s going to happen. Like I said, we need more than just 50 people at an event like that. Like Raleigh, North Carolina, they just had something for the immigration ban and the amount of people that showed up was huge. The problem is if you show up with huge amount of people you’re going to shut down streets. But that’s also so inspiring.  So we just have to figure out how to get the word out about these event so people can get involved if they are interested.

For part 1 of the interview with Billie Mays, click here.